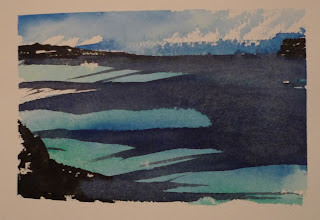 The path from Whitesands to Abereiddy traces one of the longest unbroken stretches of the North Pembrokeshire Coast. For nine miles there is no access by car and with the exception of the smugglers' cove at Pwll Caeorg the cliffs maintain their height throughout. At this time of year, Atlantic grey seals come here to pup and breed. It's the inaccessibility of the rock beaches they favour, seemingly untroubled by the storms that scour the granite and slate of all but barnacles.

Jane and I walked their yesterday. We saw the first seals at Porth Lleog, barely two hundred yards after leaving the car; they were two females, lolling on their backs in the sunlit surf. It was one of those breezy mornings, a jade sea, spotted with the shadows of scurrying clouds; bright one minute, showers the next.

To the west of Carn Llidi is a hidden valley of ancient stones and feral ponies. It shortcuts St David's Head and leads to the sheltered cove of Gesail Fawr, which my minimal Welsh translates as the big armpit!  Here we saw our first pups, four of them sleeping on the rocks, their mothers basking in the clear water under the hundred foot cliffs. Two of the pups looked newborn, a third so plump its features had lost all definition; the fourth, older again, had fur that was mottling from cream to grey.

By now the sun had chased away the showers and the breeze was at our backs. We made good progress toward Penberry, passing a few walkers on a sponsored hack. There were gulls and rock pigeons on the cliffs, a great skua floating in one of the bays - and on the landside, the last of the wheatears, their little 'white-arses' (their old country name) flashing across the field stubble.

Beyond Penberry we watched a kestrel hovering over the bracken. They are surprisingly scarce in Pembrokeshire, their inland territories lost to buzzards and kites - one birder told me the increasing numbers of goshawks played a part too. But they thrive at the coast and I often see them at the Head or the Porthgain quarries near my house. Of all birds of prey, I think kestrels are my favourite; they remind me of my blind grandfather, his gnarled hands holding mine as we'd walk each other to the scrub fields by his house; windhovers he used to call them.

Beyond Penberry the path had been strimmed and I wondered aloud if it was a way of managing the wild flowers. Probably not, but it sounded plausible. As the sun warmed the bracken some butterflies came out: a small copper, a common blue, three tortoiseshells. I was telling Jane that it's been a poor year for butterflies, the numbers in the national count down by 11%. 'You know,' I said, 'I haven't seen a painted lady all summer. Two years ago, there were thousands passing here on a mass migration.'  And no sooner had I stopped talking than one opened its wings on the rocks by my feet, its auburn wings edged with scales of black mascara. That alone would alone have made my day.

There was a seal pup at Pwll Caerog too. We didn't realise at first, mistaking it for a rock in the stream that trickles to the pebbles. A young couple on the beach pointed it out. They were camping at the bunkhouse they said, but they had to dash because their friend was getting married in an hour - on the campsite above the cliffs. Jane and I were married twenty years ago this week - we were meant to go to Rome but work intervened. Instead, we came here, eating flapjacks and drinking tap water from a plastic bottle as we listened to the pup's mother calling in the bay.

At Abereiddy we bought mugs of tea from the van that is always there. The storms of a fortnight ago had carried thousands of rocks to the lip of the breakwater; the beach, normally black with shale, was a glistening ochre. 'Give me a kiss,' said Jane, 'and don't you dare pull away.'  The surf was spoiling in the wind and I could hear the jackdaws reeling above Blue Lagoon quarry. When I opened my eyes, the pools of an ebbing tide were bright in a clear September sky. 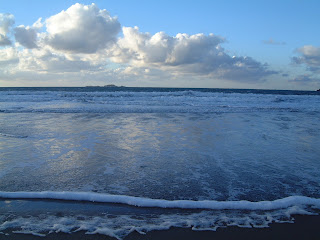