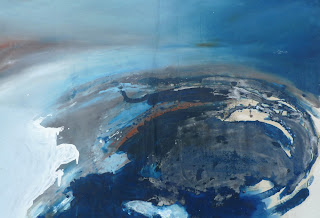 
I went to Laugharne the other Sunday. Every week I pass the sign at St Clears and yet it must have been five years since I last made the turn. The sky was dull as ash, drizzle on the windscreen; I quite fancy being underwhelmed, I said.

All day I'd taken quirky turns, zig-zagging my way eastward, even driving through Whitland for the heck of it. If you're familiar with Whitland you'll know how peculiar that is; if you don't, you probably get the picture. But in fact I rather like those bypassed towns you find throughout Wales - I mean the term figuratively, though in the case of Whitland it happens to be literal too.

Laugharne isn't so much bypassed as at the end of the road.  It sits a mile of so from the mouth of the Avon Taf; round the point is Pendine Sands and eventually I suppose Tenby though few would go that way. If you took a boat in the opposite direction you'd glimpse Llansteffan which occupies much the same position on the neighbouring Towy. The two rivers mix their silts before reaching the sea aside the eerie and little visited west coast of Gower. It's what Dylan Thomas called the Heron Priested Shore. I've always thought it feels like reaching the end of one of his more turgid numbers.

You can probably tell I'm not a fan - of Llaugharne I mean; my son's named after the poet even if he does go on. Maybe that's what I don't like - all the fuss about a house he lived in for four years and a writing shed that would admittedly be a fine place to sleep off a hangover, but is hardly worth the trip. I've never liked those literary tourist trails - to me it's the words that count; the rest is pretty much incidental.

Except the landscape, to be fair that's important too. And last Sunday the tide was out and the spreading delta was covered in pale seagrass, spotted with gulls and the odd curlew. The sun broke through the purpling clouds, light shifted across the flats, and the serpentine river, deep in its sticky trough half a mile from the shore, sparkled with blue. It wasn't exactly sapphires and emeralds, but then Wales is never like that and I wouldn't want it so. What mattered was for the first time I saw the Laugharne estuary as something more than a tea stain and a misty horizon. I strolled with Jane to the boathouse, past the castle that sits on a plinth of liver coloured sandstone, through the woods where Thomas walked on his thirtieth year to heaven.

There's a running feud between Laugharne and the fishing port of New Quay in Cardiganshire. Not literally of course, but as to which was the basis for Under Milk Wood. Thomas had lived in them both at one time or other. Laugharne can lay claim to cockle pickers, but there's hardly a fishing boat bobbing sea - even at high tide, it's more of a shifting shoreline. My money has always been on Newquay, and when I saw, in the main street of nearby Aberaeron, that there's a Manchester House (home of Mog Edwards, the draper) it cliched it for me.

Laugharne's one main street is in a state of constant renovation such that I've never seen it without scaffolding. Browns Hotel, famous as Dylan's favourite taproom, is similarly closed and being done up; opposite is quite possibly the most miserable secondhand bookshop in Wales. There are few trinket shops and the ubiquitous SPAR in what passes as a square. The actor Neil Morrissey bought three pubs here a few years back - it ended in tears and debts and stories in the paper. The whole place feels like the tide has washed through it once too often.

Jane thought differently, she liked the Georgian buildings, and wondered why the street was so grand; why so few vernacular cottages? I understood what she meant, there is a sense of something different here, but to me, it's something not quite right. As we peered through the windows of Castle House - all high ceilings and fancy plaster - it struck me I could just as easily be in Bath. I have no idea how much Welsh was spoken here, but the castle was in English hands for centuries and I wonder if Laugharne hasn't always had that split identity.

I should say in fairness, 'what do I know?' All towns and landscapes take time to understand, familiarity is essential to all but the most fleeting response. There are parts of Wales much scruffier than Laugharne, with less to offer and with far less Welshness about them - yet I like them very much.  That's not a cop-out, it's an observation that passing through on a Sunday afternoon you can't hope for more than a superficial impression - and we should always be wary of that. Maybe Laugharne is like its estuary and there are rich pickings under the silt.

We left as the sky returned to ash; our journey home in ever heavier rain. Jane asked if I'd been suitably underwhelmed? Enough for another five years, I quipped. In a way I wish I liked Laugharne more than I do; if nothing else it's a place to stop before the motorway - before the reluctant though inevitable journey east. 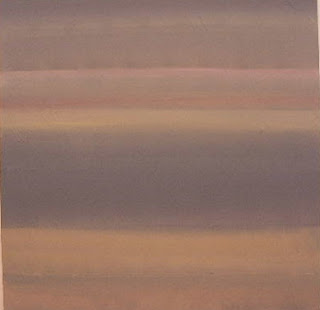