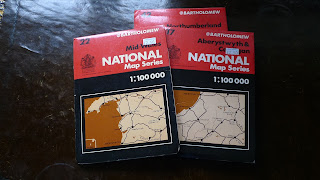 'There's a weird parcel arrived,' said Jane. 'I had to collect it from the depot and needed help to get it in the car. What have you been ordering?' Nothing I told her, a bit confused as I went to fetch it - and then I recognised the handwriting.

A few weeks earlier my friend Ian had emailed to say he was rationalising his maps. Ian is the only person I know with a full collection of the Ordnance Survey for the UK - but it was his Bartholomew Maps that were going spare. Would I like them, he'd asked?

The parcel landed with a thud on our settee - reminding me why backpackers doing the Lands End to John O' Groats post their maps to overnight stopovers. Not that today's walkers would use the Bartholomew series - they went out of print in the Nineties and had been declining for years before then. But what do walkers know about a good thing? I ripped off the paper to reveal an almost perfect collection.

I've always liked 'Barts' maps, as they used to be called. I took one on my first holiday to the Lake District, despite them being next to useless in the hills. Another time I walked a long stretch of the Northumberland coast using Map 42; this was marginally better until I reached Blyth and about half the town hadn't been drawn, causing me hours of confusion. But it was as a cyclist in my twenties that I came to use them most.

The maps were especially popular with cycle tourists. This was because the half-inch scale was detailed enough to show minor roads and spot heights, but not so large that it had to be taken out of the handlebar case every few miles. For many years the maps had a Cyclists' Touring Club logo on the front, in acknowledgement of the revisions that were regularly supplied by club members. Knowing a few CTC types, I can well imagine the letters Bartholomew received at their Edinburgh headquarters.  On rechecking the spot height at North Hill I found it to be only 824ft, not the 870ft recorded... please note the hostel at Bryn Poeth Uchaf is no longer in operation...  the Kielder Forest has now been flooded to create a reservoir!

To some extent, their inaccuracy was part of the joy. A short detour on a bike is seldom a problem, and the lack of detail might persuade you to tackle roads you'd otherwise avoid. There was something seductive about the colour scheme too; earthy tones, graduating from lime through ochre to umber, each colour indicating a gradual rise in altitude, but no mention of gradient.

The maps Ian sent me are almost a complete set. Only two are missing but I've already found them on eBay. So an instant collection - not quite in the spirit of amassing slowly, but then Ian bought them like that too. I especially like it that every map has a white label marked: John Menzies, £2.50. It's possible some have never been opened.

As I looked through a few the other night I began to trace the routes I'd cycled years ago. And I kept finding youth hostels that have closed - Bryn Poeth Uchaf is on map 17, Aberystwyth and Cardigan. Jane and I stayed there once with Ian and his wife Ros - a mile up a track above Rhandirmwyn it was a cottage with no electricity or running water. Nobody wants places like that anymore - too old fashioned, not enough facilities, they say. Jane would agree, and she's probably right - a bit like Barts maps they've fallen behind the times. But the nostalgic in me wishes it were different. And thanks to my new collection, those places, and the days that went with them, are all still there - in lime and ochre shading, with spot heights and enough detail for me to fill in the rest. 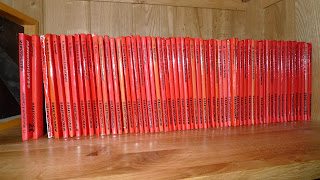