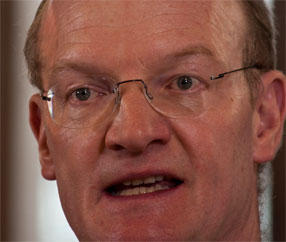 Late on Thursday I was about to hit the sack when I was distracted by the 10 O'Clock Live show. The comedian David Mitchell was interviewing David Willetts, minister for Universities and Science. I was expecting a light hearted piss take, maybe the odd Ben Elton style jibe; it's brave of him to go that show said Jane, as I readied for some topical humour.

What followed was the most intelligent debate I've yet heard on the proposals to increase university tuition fees. Mitchell contrasted the proposals to the system of free education he and Willetts had enjoyed - did the Government regard this as progress? Wouldn't fees of £9,000 p.a. deter the very people the Government wanted to encourage; was there not a case for scholarships; what about subjects (such as Classics) that would be unlikely to 'payback' with higher earnings; wouldn't the proposals reduce social mobility?

And in response Willetts made considered, well spoken, non-avoiding answers. The introduction of student loans had encouraged take up - 40% of young people now progress to higher education. He hoped the new proposals would not be deterrent; the earnings threshold for repayment had risen to over twenty thousand pounds; the best universities would prosper and the poor quality courses decline.

But despite Willetts' measured tones, the more I listened, the more I sensed something wasn't quite right - perhaps it was his smirk that gave him away?

Central to Willetts' position were two considerations. Firstly, he argued it was unfair for the general tax payer to be funding the education of those who will go on to be higher earners. Furthermore, he claimed that the average graduate would, across their lifetime, earn one hundred thousand pounds more than a non graduate - surely it was reasonable they should pay back the cost of the education which had facilitated this.

At first sight these arguments appear plausible, but on reflection, it seems to me they are deeply flawed.

If we think about the claim that having degree leads to an increase in life-time earnings of one hundred thousand pounds, then presumably these earnings will be taxed. And even at a basic rate plus national insurance it must mean that the average graduate will contribute additional tax which more than covers the cost of their tuition fees.

Willetts' own words reinforced this conclusion when he claimed that there was a correlation between the number of graduates and the number of higher paid jobs. In justifying the 40% of young people going to university,  he said it was not just a case that graduates competed more effectively in the existing wage pool, but rather that the presence of more graduates led to an overall higher wage economy. So by his own logic, it must also lead to more taxable income and revenues.

Putting it crudely, and using the terms of Willetts' own logic, the government is expecting graduates to pay twice. It isn't difficult to see this - it is simple maths - and Willetts must know it too. It was a pity that Mitchell didn't challenge him on this obvious point.

But it was Willetts' first argument that irritated me most: the claim that it is unfair for the general tax payer to subsidise higher education because they don't directly benefit.

Let's leave aside that this is a gross misrepresentation of the tax system and the percentage of revenues accruing from the 'general public'. And let's not question the numbers of 'net gainers' from State services against the numbers of 'net payers'. Let's also not get into arguments about the benefits of a high value economy, driven by technology and services which require an educated and skilled workforce, increasingly of graduate standard.

Instead let's just examine the claim at its most basic level - that those who don't directly benefit from services should not be expected to subside those who do. Isn't that reasonable; plausible; fair?

Well if it is, why don't we fund the National Parks with an entry fee instead of State resources?  Not everyone likes the Arts, or visits museums, or plays sport  - why are we subsidising these out of general taxation? And what's so special about graduate education - there's probably just as big an earnings correlation with A-levels; why don't we charge for those too? Or how about prisons - we could levy a tax for the cost of qualifications received at her majesty's pleasure. Come to think of it, why stop at education; I'm pretty healthy - I don't see why I should be funding those who are ill.

Some of these examples are more analogous to tuition fees than others - if I took more time I'd no doubt think of better ones. But the general point is that tax has never been confined to redistributing income to the least fortunate. In practice, tax revenues in a modern state system are also used to fund services that benefit society as whole. If we start salami slicing that ideal and claiming this or that service ought only and on principle to be funded by those who directly benefit, then we quickly weave a web of inconsistencies.

The irony of Willetts' sophistry is that the plain truth is a more powerful argument. Why, I wonder, didn't he simply say, 'Of course increasing university fees is regrettable, but in the difficult circumstances we judged it to be a better course of action than reducing other frontline services'.  I might disagree with that claim; I might take a polar opposite position on the relative merits of education versus, say, the armed forces - but it wouldn't matter, the argument in itself would be sound.

Perhaps it's the philosopher in me, but I especially loath the type of rhetoric Willetts tried to pass off as logic. I'd rather we had an honest debate about what we can and can't afford, than the blind alleys of a pretence which claims there is some deeper fairness behind political decisions. David Mitchell led a good debate on Thursday; it's just a pity that in the end it was Willetts who sounded more the comedian.
Posted by The bike shed at 10:50 PM