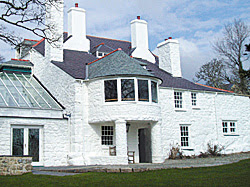 Blogging for writers - October 24 to 29,Ty Newydd, North Wales.
Is blogging a serious form of publishing for writers? That's the question I kept asking the National Writing Centre in Wales. And more pointedly I asked, 'Why don't you run a course on blogging?'  Blogs have encouraged millions of people to share their voice - I challenged them to name another development that has created so many new writers.

But are they proper writers, was the concern? Is blogging really a serious form, or is it just social networking in fancy format? And aren't most blogs, well a bit rubbish, if you want me to be frank? There's some truth in those objections, I'd reply, but then many writers' circles are as much about socialising as the quality of the output. And yes, there is plenty of rubbish; but there's quality too. I listed a dozen or so blogs that I follow and asked the director of the centre to check them out.

It's interesting that the Open College Of The Arts encourages its students to create a blog as part of their 'learning journal'. Blogging, they've realised  is good a way of sharing thoughts and work in progress, and the idea has been embraced most fully by visual arts students. Every so often the college promotes a student blog, and last week Gareth Dent, its Chief Executive wrote an article on blogging that referred to me and the Bike Shed.

The reason for the mention, is that the director at the National Writing Centre listened; so much so that they asked me to run a residential course on blogging for writers. It takes place next October and my co-tutor is the widely acclaimed travel writer, Rory Maclean. I met Rory some years ago on one of his courses on writing from life; he's one of the best tutors I've worked with - and of course, he writes a quality blog, all about Berlin where he lives. Also exciting, is that Fiona Robyn will be coming; she's a prolific blogger who recently published her novel THAW, as a daily blog, to coincide with its print publication.

And if you've never been to the National Writing Centre - because of course, you're all now desperate to go - then you should. It is based at Ty Newydd,  Lloyd George's last home on the edge of Snowdonia. It runs along the same lines as the Arvon Foundation, and this year's programme is impressive. Apart from my ground breaking offering (did I really just say that) there are courses by the Poet Laureate, Carol Anne Duffy and a list of other esteemed writers.

Those of you who read the Bike Shed regularly will know I am passionate about blogging. Part of the appeal is that blogging isn't precious: it can mix a little social networking with some decent writing; it can be good without being perfect; it's exciting and instant and it appeals to people who might not have the time or opportunity, to write a book.

But there is room to improve the quality or writing too. The course will be looking at how we might do that. If you'd like to create more engaging work, experiment a little, take feedback from a group of other writers, or just have the space to write a dozen new posts, then it should have something for you. I can promise you it will be fun; and hey, you get to meet me...  On second thoughts, that's maybe not the best of selling points.