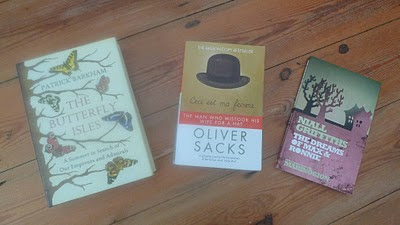 It's been a while since I did a books post, and that partially reflects that I've not been reading a great deal. But what I have read has been pretty good, and a little different for me. I'll not bother with links to the books, just Google them or try Amazon.

Niall Griffiths is one of my favourite authors: gritty, honest, often profane, but always compelling. His latest book The Dreams of Max and  Ronnie is part of a series in which contemporary authors  reinterpret tales from the Mabinogion. I especially liked Giffith's second tale, in which gangster Max, sending his henchmen to find him the perfect woman.. with tragic consequences. It's impossible for me to compare these to the original Mabinogion (such as that exists) because, shamefully, I have never read it - but the tales did inspire to buy a copy, which as a matter of fact, arrived this morning.

Pollard by Laura Beatty was the recommendation of a friend with impeccable taste. The story of an abused girl with what we'd probably call learning difficulties, making her home in a wood. As the sprawl of development threatens her home she is forced into ever more desperate measures. The descriptions are rooted in nature, the situation not so fantastic as to make you think 'that's ridiculous', and the unfolding of the plot is entirely believable. For a first novel it's a triumph; one of the best I read last year. My only criticism is that it ends rather abruptly; I wanted more.

The Man Who Mistook His Wife For A Hat, is an old best seller from Oliver Sacks. Sacks is a neurologist who describes a variety of his patients' conditions with care and intelligence.  These include the man who cannot recognise objects (hence he confuses his wife with his hat), another whose memory stopped 40 years previous, and - the case I found most disturbing - a woman with no proprioception. Proprioception is the unconscious awareness of our body and where it is - although the woman was not paralysed she had no awareness of her body, she could not 'feel' it in action, and could only sit or stand using visual clues and statuesque postures; she described herself as a 'pithed frog'.  The triumph of Sacks' writing is that he transcends the medical, and indeed the vaguely comic, to make us think about our own condition, and what it is to be fully human. 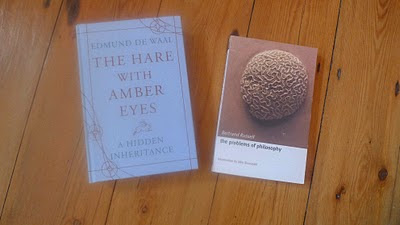 The Hare With Amber Eyes by Edmund De Wall came recommended too, and I wanted to like it, I truly did. But after a four attempts I gave up. It is the story of De Wall's ancestors, told through the collection of Japanese ivory carvings he inherited from an uncle. The bumf says it's a gripping tale of war, peace, and romance. The trouble is, I just didn't care about his ancestors, no matter how rich and powerful they were. And frankly, I didn't much care about the netsuke carvings either. Sorry; boring and over hyped.

Betrand Russell wrote the Problems of Philosophy in 1912; he called it his 'shilling shocker'.  I took it down from my bookshelf, unread for twenty years. Now I appreciate this isn't exactly the sort of book you'd curl up with your partner and read; but it's pretty fantastic nonetheless. I'd forgotten how clear Russell is, how he gets over the most complex of concepts in easy language (well, relatively speaking), and leaves you with enough brainpower to think it through. I wish he were alive today to describe the banking crisis or Middle Eastern politics.

The Butterfly Isles by Patrick Barkham was a prize from the National Trust. Barkham's quest to find all of Britain's resident butterflies in one summer is a deeper book than it appears; it is also a book about dreams, childhood, and his love of his father. His description of the Painted Lady invasion of 2009 was especially poignant for me; I remember camping on St Davids Head when they arrived in West Wales - 3000 an hour were passing us at one point. Lovely book, would make a nice gift for almost anyone; not just sad entomologists like me.

Stalin's Nose was the debut novel of Rory Maclean, my co tutor on the blogging course (yes, you know about that...) The story of a chaotic drive through Eastern Europe after the fall of the Berlin Wall, it is peopled by Rory, his aunt in search of new false teeth, her pet pig Winston, and a piece of statue that is Stalin's nose. It is also a story of his family, torn apart by the communist divide, and of the many  secrets and resentments that followed from the allegiances they chose. This book has recently been reprinted and it includes a generous introduction by Colin Thubron.

I've written before about West: A Journey Through The Landscapes Of Loss by Jim Perrin.  It so affected me that I read it again (rare for me) and I know many readers of this blog have bought it too. I also have a copy of the film Jim made on his 60th birthday, returning to climb the Old Man of Hoy, a Scottish sea stack where an accident had occurred which led ultimately to his son's suicide. It won the  won prize for best short film at the Banff festival and its narration is reprinted as the last chapter of West - it is writing of the very highest order. My book of the year by a country mile; it comes out in paperback soon.

And finally, When it Changed, a collection of short stories by writers working in conjunction with scientists. I bought this to read Sarah Maitland's prize winning, The Moss Witch - and good it was too, but like all short story anthologies the collection is mixed. The book's premise is to reconnect literature with research, authors with scientists, and for each to learn in the process. Reading the scientist's notes after each story, I have the impression the writers got the more out of it. An interesting twist, but I'd rather have Raymond Carver any day.

That's all for now. What are you reading?
Posted by The bike shed at 2:07 PM