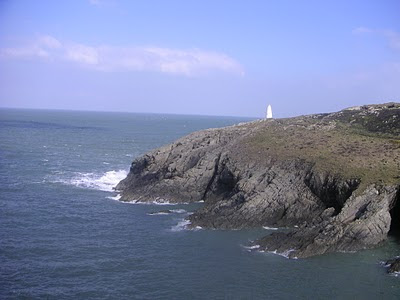 I've been writing about the places to which I find myself returning.  Here's an adapted extract; perhaps one day I'll see you there.
On the low sloping cliff to the north of Porthgain is a white tower. It is made from field stone, about the size of a small lime kiln, mortared with mud and covered in a flaking wash. The tower is one of two that indicate safe passage to the harbour. A few years ago its starboard sister was struck by lightning – the locals rebuilt it. For in a heavy sea and squalling wind the fishermen need these towers still.
I walked there recently, alone on a December morning. I’d forgotten a scarf, my ears were sore in the wind. As I climbed the mud sticky path a flock of curlew rose from the sand by the slip. They flew to the crumbling walls of the stone hoppers that loom over the quay. The hoppers, a relic of Porthgain’s industrial past, once stored the graded stones that were loaded onto sloops bound for Liverpool and Newport.
Looking north, I felt the curve of the ocean folding over my shoulder. The light at Strumble was flashing and I could make out Pwll Deri hostel beneath Garn Fawr, the big cairn. That morning the sea was flat, a gunmetal grey darkening to a pewter horizon, lobster pots bobbed in the marbled swell. I have stood there, in other Decembers, as the waves swallow the cliffs and clots of spume settled as if it were snow on the dun grass.
In the lee of the stack I thought of the times I have come here; the years of looking, of painting the view, counting boats; that first time, with Jane. And I remembered too, our boys running round it; how we said it was the magic tower; five times for luck, five more to earn a wish. They used to hold their coats like kites above their heads, screaming and leaning into the breeze.
As I made to leave I had a sudden urge to measure the tower’s circumference; holding my arms at full stretch I sidled round, hugging the pock marked stones. Its girth is four and half spans and I have the whitewash on my fleece to prove it.


Two gulls were circling above; they were black-backs, dismissive of the kestrel that hovered in the faint ridge lift; its tail held flat for balance; down and into the wind.
Posted by The bike shed at 10:40 PM