What's on my desk? 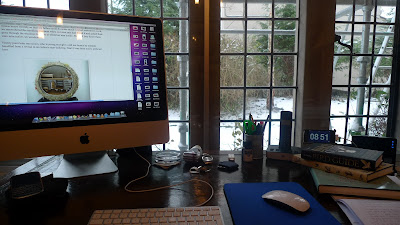 This is picture of my desk at eight fifty one this morning. You can tell that from the clock on the right. And if you were especially sharp you'd notice it isn't really a clock at all, but an Ipod touch 3G. You might also notice that I have a BT home-hub, a flashy Apple Mac computer and a Blackberry (switched off) on top of my brown leather wallet.

You might register that the desk is old, with a leather top - and that the windows are leaded with stone mullions. Outside there is scaffolding, so the roofers have not finished; it is winter - and do you see the fat wood pigeon on the snow beneath the birch tree?

That's not all the picture can tell you about me. On the screen is a blog I follow. There is a book of birds, another of moths, and the Oxford Book of Nursery Rhymes; some of my writing underneath. Towards the back of the desk are my banjo picks, a watch (not trendy), fifteen pounds in notes, an electric razor, a magnifying glass, a bottle of drawing ink...

It was my my art teacher who taught me how a still life can tell a story. I once did a painting of a handbag with its contents spilled onto the floor: shopping list, rent book, a broken doll, tranquillisers. Painters have long used symbolism to add to the narrative; skulls to indicate death, snakes for wisdom, swans for love and fidelity. It is rare to do this now, but at one time very particular emotions could be represented by say flowers or fans. Well into last century painters such as Rene Magritte and Gustav Klimt used symbols extensively.

And what might Hercule Poirot deduce from my desk - the razor is unused, the watch indicates middle age, the date on the screen, the names of my folders? Before I know it, I'd be found out for staying home when I might have made more effort to go to the office!

This reminds me of a game we played as children; we called it 'murder clues' and the idea was to leave no trace of your presence - in case you happened to kill someone later that day! Forty years later, if my boys leave a wrapper or a yogurt pot, I still find myself saying, pick it up; might be a murder clue.

Leaving behind that less than cheery note, I wonder what is on your desk? Many bloggers don't like showing their face, but maybe their desk would reveal more. Does it say enough, or too much for comfort? Perhaps you will post a picture for us all to see?
Posted by The bike shed at 10:37 AM

Labels: About me, painting