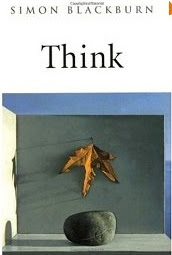 Putting Dylan to bed last night he asked me, Do you like to go thinking? Well of course, I reassured him; if we didn't think, we couldn't talk, or decide what to ask Santa for Christmas, or...  I know that, he yawned, but do you LIKE to go thinking Daddy, that's what I want to know?
It's a strange question for a child to ask, but perhaps understandable given the time I spend in my study. It's also a good one, because it allowed me to think about thinking, which is about as near philosophers get to being paid double time. For thinking, I'd say, is one of my favourite pastimes.
This isn't new. As a teenager I'd muse on deep and troublesome issues as I ambled home from school. Problems like: if I can hear myself think, then who exactly is doing the talking; or why can't I imagine a new colour; or more frequently, is it wrong to think of Tracey Burnett when I'm snogging Sharon Simpson?
And I'm afraid the habit stuck - the thinking bit, if not so much the snogging.
At university I studied political philosophy, which might have got it out of my system, had not my first proper job been so fatefully lonely. A sales rep for a local newspaper my territory was loosely defined as Northumberland and the Lake District; I was given an old Vauxhall Chevette and drove fifty thousand miles a year occasionally bumping into customers - I loved it. Two years later my manager told me my car was being upgraded with a cassette radio! Oh, there's no need, I said, I never listen to music in the car. I'm sure he thought I was trying to impress him.
Still today, I seldom listen to music in the car; I prefer the silence of long journeys as an opportunity to work things through. Walking is like that too. Yesterday morning, I drove ten miles from my house, parked the car and tramped home along the old railway line. I did this partly because it was a beautiful morning, but also to have some time to ponder. I spent most of it contemplating two films I'd watched this week.
The first was the Diving Bell And The Butterfly. It is the story of Jean Bauby, a victim of locked in syndrome who could communicate only by blinking. Bauby was physically paralysed but fully conscious: able to hear and see and smell, and eventually to 'dictate' the book on which the film is based. But his condition was perhaps as near to 'life as thought' as it can get. There was a scene where his eye was sown up to stop infection - it made me shudder, as if he was being further reduced to the bare essence of life.
The second film was Restless Natives, about two youngsters who dress as a clown and a wolf man to rob tourist coaches in the Scottish Highlands. It's a quirky feel-good movie with a fabulous soundtrack by Big Country. But it's nothing like the stuff I normally watch and the ending is bordering on the ridiculous. So why did I like it so much? I'm really not sure, except maybe it's that hope and spirit triumphs over tragedy - which in a way has parallels with Jean Bauby's story.
Aristotle said that the best existence was a one of contemplation. That may be so, but he was a professional thinker and by the time I reached home I was in need of more physical pleasures. Personally, I'd add good food and wine, the joy of landscape, a sense of love and security and a hot bath to his singular proposition. But then I've always have been greedy for life.
Interestingly though, as my walk confirmed, if I had to pick between my knowledge or my wealth, my mind or my body, the absence of love or loss...   I know precisely the choices I'd make.
So yes, Dylan, I like to go thinking. I like it very much.
Posted by The bike shed at 10:32 PM