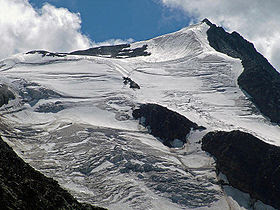 On a clear dawn in late July 1984 we ambled over the glacial moraine that leads to the slopes of the Wilder Freiger mountain; at 3400 metres it is one of the highest peaks in the Stubai Alps. By mountaineering standards the route is easy, only a few hours climb from the Nurnbeger Hutte where we had stayed the previous night.

Everything about that morning was perfect; I was happy, confident, the trails of mist lifted as the sun warmed our suspended valley. We reached the mountain proper in about an hour, ascending the lower slopes on a well graded path and cresting the ridge by mid morning. I remember stripping to my shirt and gulping water from the flask, the cirque of peaks sparkling. There were climbers descending already, some had come from the Italian side; others were passing us on the ridge, grüs gott they said, berg heil.

The summit was only 500 meters above us, a fine rock ridge followed by a snow slope that wouldn't need a rope. A couple we'd met the night before had caught us up and suggested climbing together. You go ahead I said, we'll follow shortly.  And as they passed, I noticed a cloud gathering at the summit of the Daunkogel to the West. It was nothing to worry about, a ball of cotton; we hitched our sacks for the final push.

And in that instant of standing up, I committed to turning back. Twenty five years later I still can't explain why; except for the alarm that clanged inside me: that cloud, beware of that cloud, it rang.

Rebecca wanted to go on; she was my girlfriend at the time and later my wife. We'd have an easy day I consoled her, read books and lounge on the terrace at the hut. She deferred to me but couldn't understand why I was heading down. As we did, so more climbers passed us, grüs gott they said, berg heil.

An hour later we reached the Nurnberger Hutte as the first snow fell. We sat in the bar and the clouds enveloped the last view of the mountains, thunder rolled in from moraine. As the storm took hold a stream of bedraggled climbers knocked the door, beds were made on floors and the hut guardian checked his list of expected guests. The atmosphere was tense; we were happy to be safe but there was a darkness too.

Two climbers died that day, somewhere on the Italian side, descending in the storm. I don't know more than that. Perhaps they were lost the ridge, or struck by lightning; the snow might have given way - it is possible they were poorly equipped. And possible too that it was none of these things - sometimes there is no logic to it.

The mountaineer, W H Murray wrote, The moment one definitely commits oneself then providence moves too. A whole stream of events issues from the decision, raising in one's favour all manner of unforeseen incidents... that no man could have dreamt would come his way.

I agree with that, and could write of countless examples, some of them the toughest decisions of my life. Twenty years ago I separated from Rebecca - possibly the saddest, and arguably the most selfish, commitment I have ever made. And yet it led to greater joy, eventually on both sides, I hope.

But I have learned too that sometimes the power of committing can work in reverse. Sometimes it is not the going ahead that brings the providence but the holding back. There are many times I have walked around easy rapids, halted though the way is clear, said no in the face of overwhelming reasons for yes - and I have seldom regretted it. Two years ago Jane and I set off  across a similar stretch of the Stubai; we returned after less than a mile when I sensed that same warning. Again, the clouds rolled in.

Always, at these times, I've listened to my inner alarm. I have come to trust its sounding; and to recognise the difference between the tinkling bells of adrenaline fuelled uncertainty, and the overwhelming, inexplicable clanging that has kept me safe when logic says nothing should go wrong.

They say that mountaineers climb for the view from the bottom as much as the top. It is a reference to what the hills teach us and the memories they hold. I have not quite climbed the Wilder Freiger, but it has taught  and given me more than most. When I last saw it two years ago I silently gave thanks. One day I will finish the job - perhaps.
Posted by The bike shed at 11:02 AM

Labels: About me, Hut hopping in Austria, Past Imperfect