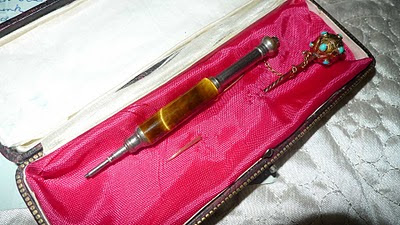 My Great Aunt Kitty lived in a fading two bed terrace in Newcastle on Tyne. It had threadbare carpets and horsehair sofas that once were stylish - she wore copious jewellery, too much rouge and was entirely dependent on the help of others. She ought to have lived in Paris.
I must have been about thirteen when I first met her. Would you like a shandy? she asked, pouring me half a tankard of ginger beer and topping it up to a pint with dark sherry. It's one of my specialities, she winked - we used drink it at sea. Aunt Kitty had lived a full life that I suspect was half real and half fantasy, but we took to each other nonetheless.
Her house could have been an antique shop; not just for the furniture, or the immaculately displayed china - but because of the labels! I can't be bothered with a will, she'd say, I just scribble who it's to go to and stick it on the back. If you lifted a cup or turned plate it would have a yellow label with the name of friend or relative. And if she had a row with someone, she'd cross their name out and replace it with another. They can all see what they're getting, she'd say, everyone wants the pictures.
My Grandfather's name was on those: magnificent Victorian seascapes, framed in gilt and mercury glass. He was given the house too when she died, for looking after me more than the others - though when it sold, he insisted on dividing the proceeds with the other relatives. Fifteen years later he died, and I advised my mother to auction the seascapes  - she had no use for them and they raised a good price - but I've always rather regretted it.
My name was on two boxes. The first was a collection of tiny exotic beetles, which she'd collected on her travels - I keep them by my desk still. The second I had not looked at in years; a small jewellery box containing a gold cravat pin and a retractable pencil.
They are beautiful, especially the gold pin, decorated with turquoise stones and fine leaf engraving. The pencil is made, I think, from Tiger's Eye, and can be worn as pendant. Inside the lid of the box came a note from my Aunt.
It explained they were curios collected by my Great Great Uncle, William (Bill) Page. As a teenager he had enlisted as a ship's engineer, led an adventurous life and gathered a reputation for the ruination of beautiful women - including his cousin Ada! He was accompanied everywhere by his faithful servant 'Coffee', and loved gambling at the Newcastle races. Bill met his end on the Congo: electing to sleep in deck he presumably fell overboard and was devoured by crocodiles. 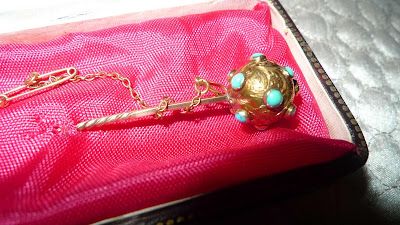 How much of this is fact is questionable. My Uncle was certainly a sea going merchant and he collected items from Africa, but the mention of servant called Coffee seems fanciful - and a touch too close to the Geordie song, The Blaydon Races, a verse of which mentions the character Coffee Johnny.
wasn't averse to a little invention to fill any gaps in her memory. We now know that uncle Harry was not  lost on the Titanic, that various 'ruined' sisters were far from innocent victims, and that Uncle Bill probably died in a nursing home rather than the Congo.
But in a way I prefer the stories; her gifts are more real for the past she gave them. And she was right about some things too - relatives always fight over wills, and sherry with ginger beer is surprisingly good. We should have more Aunt Kittys, I think.
Posted by The bike shed at 2:43 PM

Labels: About me, Family, NABLOPOMO