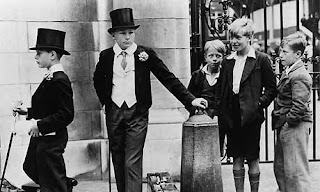 It is interesting how our values are formed.
The philosopher in me would like to think reason holds sway; that disinterested reflection can show us the moral standards we should live by, and be happy to do so – because we know them to be fair and just. When we deviate from those values, it does not necessarily make us evil, but it we know in our hearts that we are falling short.  And if new evidence or better reasoning comes to our attention we should adjust our judgements; change our values accordingly.
But I know too that life isn’t like that.

More often our values are intuitive; a gut response to right and wrong that is coloured by past experience and shaped by personal prejudice. We are victims of what philosophers call emotivism - searching for logic to support our likes and dislikes rather than taking an objective, disinterested view. And as a result we all of us have inconsistencies, little hypocrisies and hobby horses that don’t quite fit with the bigger picture, with the values and standards we expect from others or hope to see elsewhere.

In most cases, if we reflect enough, we can recognise this trait and make allowance. We know, for example, that our dislike of next door's dog has more to do with our being bitten as a child than anything about the animal itself.  But sometimes our gut reaction is so strong, and so entwined with our beliefs, that disentangling it from rational thought can be next to impossible.
For example, I have long held the view that private education (or independent schooling as it now prefers to be called) is fundamentally unfair. In a meritocratic society - in which opportunities are limited and positions awarded on merit - I believe it is unjust that the richest in society can effectively buy an advantage over those who cannot afford to do the same. Education is the gateway to future opportunity and as such it is different to other goods and services; buying advantage in education undermines the whole principle of merit as the basis for rewards and progress in society.
I have reflected on this conclusion for over thirty years; I have read extensively on the subject, considered the arguments for and against as best I can; I have written essays and corresponded with great thinkers on the issue – and always I came to the same conclusion: that private education is unjust, or more bluntly, wrong!
But the point here is not to argue too much about the ethics of private education (I’d fall out with too many friends), rather it is to declare a truth about my own reasoning and perhaps illustrate its limits.  For the fact is, my intense dislike of the public school system is not entirely objective; it is also a gut reaction to my first term at university.
I went to university from an above average but hardly excellent state school.  I worked hard to get there; had the benefit of a few great teachers and the handicap of many poor ones – the route that I naively presumed everyone took. In the town I lived, barely anyone went to private school and if I gave the morals of the issue any thought, I probably concluded it was unimportant, because it affected so few people.
How wrong I was.
At university I quickly discovered that nearly half of my peers had been to private schools. Many had received privileges and support that no one could regard as even vaguely equitable. Some were clearly bright young people; other had palpably been crammed beyond their ability; virtually all would agree they did ‘better’ as result of their privileged education.
And I remember feeling how unfair this was; more than that I had a deep and visceral reaction to what I perceived as an astonishing injustice.  I thought of my friends who, for the sake of a few grades, had missed out on degree placements; how others had only found places at polytechnics (no disgrace but frankly not as good), and I compared them to what I saw as the undeserving, upper class, uber-privileged, give-me-all-the-help-possible, students in my class..
That wasn’t all  – perhaps it was coming from the North, the sense of being a small town boy; I still don’t fully know – but I would find myself taking a jaundiced view of anyone who had been to private school, no matter what their merits. And the truth is, that thirty years later, I still do. Regardless of how clever or worthy anyone is, if I learn they have been to a private school, my instinctive reaction is that they have been ‘helped’ and their achievement is somehow diminished in my eyes; at its extreme I can (quite unreasonably) actively dislike them as people too.
Sometimes though, that isn’t hard. I remember one chap at university, - I’ll call him James - he’d been to Harrow, flunked his A levels the first time round, been crammed for a year to get the necessary grades and was now at Leicester University with the express intention of getting no more than a ‘pass’ degree. When we first met, I hated him.
But the trouble with disliking James was that he was a nice bloke: he was personable, funny and a hit with the girls; and he had the inner confidence which comes from knowing that life would be fine regardless - after all, his father was a millionaire. The truth was I liked James, a lot; what I hated with a passion was the unfairness he represented.
And still today, I find myself in that same dilemma.

Many of my friends and colleagues think of private education as the norm. They don’t view it terms of fairness; to them it is about giving their children the best chance in life, of maximising opportunity and fulfilling potential. As one of them said to me the other day ‘I want my children to have the best, and if I can afford to give them a head-start, why not?’  I empathise with that position – as a parent I have instinctive desire to see my children thrive, and it is hard to restrict their opportunities in deference to the niceties of ethics.
But ultimately values do matter. They matter not only in a general sense of fairness throughout society; they matter also to how we see ourselves and our sense of achievement. When I asked my acquaintance why he used the expression ‘head-start’ rather than advantage he replied, ‘Look, I know independent schools are unfair, but having a head-start isn't as bad as cheating.’
I beg to differ. When my son raced his bike it was fundamental that everyone started from the same line, had the same gears and equipment and didn’t receive a push off – any transgression resulted in disqualification.  The analogy to education is not quite correct but it is not far off. There comes a point when the best coaches, the best equipment, the best facilities, the inside connections.... amount to a clear and unfair advantage. We all know this; it’s precisely this advantage that parents are paying for when they send their children to private school.
But returning to the bike racing, the interesting thing is that had my son sought advantage, my pleasure in his achievements would have been diminished.  His too, because I know of no one who is more alert to what is fair than him. And that isn’t about reason either – it is an intuitive understanding of what is worthy and what is less so.
I can’t resist finishing with another anecdote. Recently I was talking to someone I am close to, whom I like very much and know to be a good and caring parent. He said of his son, ‘The thing about X is that he just isn’t bright; frankly, most of his education is a waste, but if we didn’t send him to private school, there’s no way he’d get to university.’ That’s my point entirely! ‘I know,’ he replied, ‘but we’re not all philosophers or saints and, hey, wasn’t university great?’
I laughed and let it pass.  He’s a nice guy, and I didn’t want to argue. What's more, I know that for all my reasoning, my quoting of ethical theory and supposed objectivity, it is really that first term at university, and the shock it gave me,  that I’ve been reflecting on all these years.
Posted by The bike shed at 4:15 PM

Labels: About me, Past Imperfect