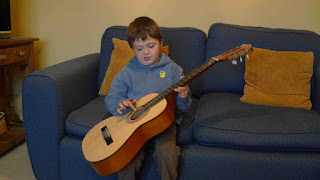 When I was a teenager my mother made a comment in passing about skills for life.  It wasn't particularly insightful and I doubt if she remembers, and yet I've long pondered what she said: 'There are three skills I wish I possessed: to be able to type, to play a musical instrument and to speak a foreign language.'
Why don't you learn then, I thought.
But of course that is easier to say than to do, especially when you have a family to look after, a job to hold down, a house to clean...  And whilst we know that children have an innate ability to absorb knowledge, we also know their capacity to learn has peaked long before they are teenagers. By the time most of us have reached our twenties, tackling new skills is all too difficult.
Perhaps that explains why it was, by the time I came to Wales in the Eighties, I'd not mastered any of my mother's wish-list. To be fair, I had other skills: I could draw and paint and climb and tie knots and paddle a kayak and navigate in the dark...  And I suppose I knew lots of 'stuff' that others might not: the names of moths, philosophy, economics, even how to sell advertising (boy, does that feel long time ago).
But still it niggled that I couldn't do any of the 'the list'.
It was the coming of computers that taught me to type; that and a pirate copy of a Mavis Beacon program.  Despite her stern warnings, I still look at the keys out of habit, but I'm better than a two finger basher and can manage about fifty words a minute on a word processor.  I'm convinced that I couldn't write seriously if I didn't type, largely because editing and re-editing, and re-editing, and...  is the way that I craft my words. My mother was right; it was a useful skill to master.
I often wonder if there is something about our twenties - a reaction to school; a need to get on with our careers - that turns many of us away from formal learning.  I was certainly like that; and I notice many of the young people at work seem still to equate learning with 'studying' and all its negative connotations. In truth we continue to learn whether we study or not: becoming parents, getting promoted, coaching the soccer team... But these things are not quite the same as the lifelong skills implied by my mother's list.
For myself, I was in my thirties before I returned to formal learning. It happened gradually: I read more widely, painted more seriously, started to write. I became more introverted too; I'd say more creative and aware as well. But most importantly, I came to enjoy the process for itself.  So it is strange that it took me so long to tackle number two the list.
This January I started playing the banjo. It's been a revelation. I'm not much good, but the process is so different to anything I've done before - the gradual coming together, the sense of achievement - and to some extent the sense of loss that I didn't try when I was younger - has fascinated and pleased me. I shall never be great player, but with diligence (which I have in abundance) I might be almost as good at plucking as I am a typing. And if I can mange that, it will no doubt give me immense satisfaction. Yes, my mother was right again.
So what of the third item on the list?
I should probably ignore it; accept that foreign languages are not for me. After all, in my last French exam, aged 13, I scored 2% (for spelling my name correctly) - and that was better than my mark for Latin! I could use the same energy and learn something different - just as valuable, probably more useful.
Yet something about that list still niggles.
And every time I go to Wales it niggles me all the more.  They do special courses for beginners; it would be more useful than French; my English teachers thought I couldn't write either.  Maybe when I retire, I think. I'd have more time then...
Just maybe.
Nos da.
Posted by The bike shed at 11:51 PM