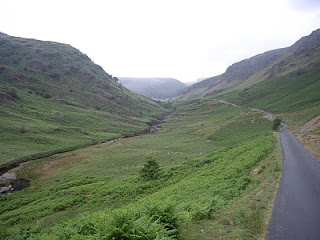 Two things snapped this week.
Usually I’d regard this as a problem – snapping not being associated with matters going to plan. But whilst neither break was something I'd have wished for, after some reflection, I’d like to think there is a brighter side.
On Wednesday I met my old and fine friend Ian. We’d planned a short cycle tour that would take us from the village of Clun in Shropshire over the Marches to the wonderful Elennydd Mountains in Wales. The route wasn’t long (about 120 miles), though with only sixty miles cycling in my legs this year I wasn’t expecting an easy ride.
In my twenties and thirties, cycle touring (alongside climbing and kayaking) was a simply a part of what I did: I rode the Pyrenees on a tandem, the Alps many times over; long tours in Britain, France, Germany. To cycle a hundred miles was no big deal.
And for the last eight years I’ve supported my son, training with him for his races, taking him abroad, mountain biking in the woods, riding the velodrome...
But it’s easy to kid yourself.
I may have remained close to cycling, but in truth I have practiced it less and less. As I reached my forties I took up other interests; as my son got faster I rode in his wake; faster still and I cheered from the stands.
To be fair my lack of miles this year was largely the result of breaking my ribs – more painful and debilitating than I ever imagined. Nonetheless, the general point stands: as we readied to leave Clun I had the distinct feeling that my cycling pedigree was more historic than contemporary.
But hey, it was only a hundred or so miles; we had two and a half days; I could get through that couldn’t I?
And of course I did. What’s more as the miles passed I began to enjoy it too. The first day was a hot but short hop to Kington. The second was damp and tougher, but always we were heading toward the mountains I consider the most special and lovely part of Wales. Indeed, as we neared the Abergwesyn Pass I felt bold enough to say, ‘It’s interesting but even though I’m out of shape, I know I’ll make it.’ That inner confidence, I speculated, comes from a deep core of experience; without it your doubts would be overwhelming and you’d just give up.’
About five miles later that core snapped.
At the foot of the Devil’s Staircase – an aptly named hill with a 1 in 4 gradient – I got off and walked; no disgrace in itself, except I didn’t even try. The excuses I could make (the broken ribs, the wine in our panniers, the ridiculous gradient, fifty miles that day) – all of them counted for nothing. I had ridden this hill only two years previous – admittedly with more grunt than grace – but least I had done it.
I recalled the lines from Housman’s poem, that two days earlier I had recited to Ian in jest – it was written not far from Clun and seemed appropriate to two old gits setting off on a cycle ride better suited to younger legs.
.... The happy highways where I went
And cannot come again.
As I looked down from the top of the Staircase I realised this was the first time in thirty years I had voluntarily walked my bike up a hill.
The next morning, after a night at the gas-lit Dolgoch hostel, we set off for Llanwrtyd Wells. Again I walked the hill; this second time less painful than the first; reflecting how quickly we adapt to our limitations and taking comfort that that old age might be like that too.
Freewheeling down the other side, something else snapped.
This time it was my chain – the first time in forty-nine years never mind thirty! We fixed it at the side of the road, using tools and knowledge that younger riders would be unlikely to have. I thought of the Tortoise and the Hare (Dylan’s favorite story) and I knew – from a deep core of experience – that we’d still make it in time to catch the train that would shorten our journey home.
But most of all I thought ‘Thank God I didn’t cycle the hill’.  For the torque of my weight on that chain would undoubtedly have snapped it as the gradient steepened. I remembered the chap I knew who did something similar, his forks collapsing and him crushing his bollocks into the bars - the scars on his face, the bruises on his thighs and the bandy legged walk.  Perhaps there was a brighter side to failure after all.
As it was I finished our cycle route in reasonable style. We hitched the short train ride to Llandrindod Wells – wheeled out of the station into a bike shop opposite, bought a new chain and cycled for thirty or so miles above the delightful Ithon Valley before the deceptively steep climbs on the outskirts of Clun.
Ian had been impressed when I’d recited the Houseman poem. As I sped down the final hill and into Clun I recalled it in full.
Into my heart an air that kills
From yon far country blows:
What are those blue remembered hills,
What spires, what farms are those?

That is the land of lost content,
I see it shining plain,
The happy highways where I went
And cannot come again.
Pulling to a stop at the packhorse bridge, my brakes hot from the descent and my heart gradually slowing, I couldn’t help but smile. Maybe that second verse wasn’t quite as apt as I’d thought – at least not for few years yet.
Posted by The bike shed at 1:48 PM

Labels: About me, Bikes, Wales