Lloyd George, writing and risks - in a round about way 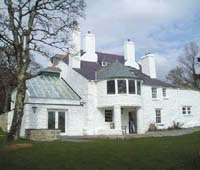 I am sitting in the last home of Lloyd George at Llanystumdwy in North Wales. The curved windows of the  library overlook a large walled garden, Barmouth and the Rhinogs just visible above the trees.  To the West, the sea meets the sky in an a hazy pink horizon. I could sit here all day; reading, faffing, playing my new banjo (picked it up on my round about  way here)...

But I can't because I'm here to write.

I'm on a week's course with the Tynewydd Foundation.  The theme is writing and nature, and one of the tutors is Mark Cocker who wrote Crow Country to much acclaim a few years ago. In a round about way Crow Country inspired me to find the starling roost near to my house, so it will be interesting to meet him. And hopefully I'll have the time and inspiration to write some blog posts and finish the assignments for my degree course.

It seems appropriate to be here at Lloyd George's house given the outcome of the  recent election.  As the first Welsh and last Liberal prime minister I wonder if he's turning in his grave at the thought of the alliance with the English Tories?  Or is his ghost restless at the prospect of change, plotting and scheming as I write. I'd put money on the latter.

But either way I ought to sense it here - after all, his grave is down the road, next to a museum dedicated to his life. As I walked past it this afternoon I wondered how many prime ministers have a museum in their memory? No many. I can't imagine there will ever be a Major or a Blair Museum - or Brown one for that matter.

And that, in a round about way too, tells me something about taking opportunities when you have them.

If I think about British politics in last twenty years I genuinely can't put my mind to anything inspiring or different; any positive  legacy that historians will point too. Afghanistan maybe - time will tell - but that's hardly something we set out to achieve. Whenever I have met politicians over the last two decades (and I've met a lot of them)  I have pondered, when and how it was, that their outlook became so pragmatic and cautious. You'd think with the  parliamentary majorities of New Labour they 'd have risked a bit (to be fair to Major he had a tiny majority). But it was almost as if the moment they had the chance, they became too scared , the responsibility was just too much to carry.

I hope my week here isn't like that.  My friend and tutor, John Skinner, used to say there was a fine line between crap and gold, between brilliance and tosh - and we should test that line to the limit; risk everything for the chance of brilliance. John was talking about paintings, not the economy or the future of the welfare state - so I guess he could be a bit more cavalier than Prime Ministers. But the general point stands; there's not much point in having an opportunity if you don't then take it.

As I sit looking over the estuary, I'm hoping I'll take some risks. Hoping I'll try something new and purposeful - something Lloyd George would have approved of.
Posted by The bike shed at 6:31 PM

Labels: About me, Museums