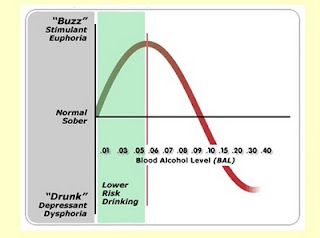 When I was sixteen I began studying for my economics A-level. I was finding it tough and I wasn't alone - the abstract theory in Lipsey's Economics wasn't making much sense to anyone in the class. Then one day, my teacher, attempting to explain the bell curve of diminishing returns, said something like:

'Stop looking at the chart and think of it like this. You eat one Mars Bar - yummy. You eat two Mars Bars - even more yummy. Then three - that last one wasn't quite so nice. Then a fourth - I'm beginning to feel sick. And a fifth - I'm sorry, do you have some soapy water...'

I remember that somewhat exasperated speech, because it was the moment something clicked. I get it, I thought, I finally get it. Mars Bars give you pleasure - but each one gives a little less than the last, until finally they stop giving any pleasure at all. And that's why the graph dips into negative territory. Of course, why didn't I see that before - it's just like getting pissed.

From an early age, we intuitively understand the law of diminishing returns - at least we do once we've stuffed our face with birthday cake and felt 'icky' afterwards. Our understanding of the concept is often reinforced in our teenage years when we drink one too many bottles of cider, or wine, whatever... you can have too much of a good thing, is pretty much the whole theory in an nutshell.

And in later life, if you are anything like me, collecting things can have a strong tendency towards diminishing returns. We start out enthusiastically, each acquisition giving us great pleasure; we delight in the occasional gem or bargain that boosts our collection. But somewhere along the way the joy of each find wears off, our desires gets more expensive or we start buying items to 'complete the set' rather than loving the object itself. I once paid more than a hundred pounds for the Observers Book of Folk Songs - it sits on my shelves unread.

Simon Garfield touches on this in his excellent and hilarious book, The Error World. It is subtitled, a memoir of obsession and desire, and it describes his love of stamps and the absurd length he has gone to in collecting them. After losing out at auction he is despondent (his bid of £6000 was trumped by one of £10,500); eventually he realises that his collection is no longer giving him pleasure. In the jargon of the economists he is experiencing 'negative returns'.

Christmas is diminishing returns on a grand scale. I love Christmas and I tend to throw more cash at it than I should, but I know deep down that the most of the pleasure could be had for half the cost. And sometimes spending less can actually increase our pleasure - forcing us to think about what we really would like to eat, or drink or receive as a gift.

This year, my mother in law has been ill, our plans have had to change and we will celebrate Christmas in Wiltshire before travelling to Wales on Boxing Day. We therefore need to buy enough food for Christmas Day and minimise what will have to be transported or thrown away the next. It's interesting to see how the shopping list changed - to understand what we really consider important to a special celebration.

Coincidentally, I struck Mars Bars off the list - I had wanted some for party a game that would only have irritated my boys. Which brings me back to my economic teacher. His name was Pete Johnson and after his little speech I used to pester him with questions, trying to 'make real' the abstract theories we were learning. As we went through the syllabus I had twice as many questions as the rest of the class combined - at one point he banned me from a lesson for being a nuisance.

I'm sure he was right to do so - quite possibly my questions were giving negative returns to everyone else. But he did have the good grace to call the class to attention at the end of term, addressing us in serious tones :

The average mark for this terms exam paper was less than 4o%. This is deeply disappointing - unless it improves, most of you will fail and have wasted your time. Even the second highest mark was only 60%, which shows the spread of your mediocrity.

There is however one exception - a member of this class who has driven me to distraction; at times I was convinced he was either an idiot or playing the fool. But clearly I was wrong. Mark Charlton, your result was 95% - from now on you may ask as many questions as you like.

I did too, and in truth I've never really stopped. Though just occasionally Jane will remind me that I've reached the point where asking another might not be the best of ideas.
Posted by The bike shed at 4:06 PM