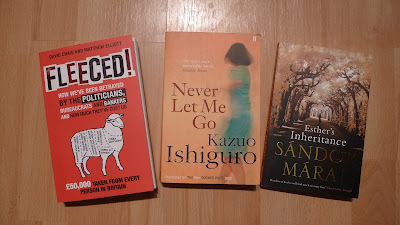 Christmas is a good time for books, not only do I receive many as presents, I also have the time to sit down and enjoy them. So I'm looking forward to next week, holed up in Wales with a pile to get through - but more of that later. For now, what have I been reading?
After the excellent Remains of the Day, I bought two more books by Kazuo Ishiguro: The Unconsoled and Never Let Me Go. What a contrast.
The Unconsoled is the story of Ryder, a brilliant composer, due to give a recital but suffering from memory loss and delusions. The narrative is confined to the days leading up to the concert, set in a city which is unknown to him and yet clearly a part of his past; the characters he meets are both ordinary residents and also his school friends, his wife, his son. The city too is surreal - typically he walks through the back door of an art gallery and finds himself in his hotel - the sort of landscape we might experience when dreaming. Indeed the entire book has a hallucinatory quality - the bizarre accepted as normal, tangental passages reinforcing the psychotic feel, time and events merging into one. Often I longed for the book to end; when it does it is like one of those French films which fade out after nothing has happened, leaving the uncomfortable feeling that you've watched something important but you are not sure why. In summary, a very, very strange book - depending on your point of view, either brilliant or plain weird. On balance I'd choose the later.
Never Let Me Go is the story of Kathy, an ex-student of a seemingly idilic boarding school. But almost from page one we know something is awry with this school and its pupils, and indeed with Kathy. Gradually the shocking facts of her past and present are revealed, again within a time and landscape that is both recognisable and not - it is set in Britain, but not as or when we know it. As the story unfolds it becomes disturbing and compelling in equal measure - at one level it is a story of love and friendship in the face of an unspeakable future - but ultimately it is about how we are all trapped, and how readily we accept our fates. As good as Remains of the Day and very possibly the best book I've read this year.
Fleeced is a rant at the performance of government and politicians in the first decade of the new millennium. It is a challenging, if somewhat biased guide to our economic problems. The authors are the founders of the Taxpayers Alliance a non-aligned pressure group lobbying for reduced taxation and better government. They set out to expose the waste of three trillions pounds, accusing politicians of failing to do what is 'right' in favour of the electorally expedient. It would be easy to dismiss much of this as an extension of the Daily Express, but beneath the jingoistic ranting there are a number of very fair and well researched challenges - the growth in public spending; the lack of responsibility for the collapse of of the banks; the lack of political courage - best displayed in the ostrich like attitude to tackling public service pensions - the squandering of money on a veneer of progress... Makes you think.

Error World by Simon Garfield was an early Christmas present from the Secret Santa at the office. Whoever bought for me, chose well. Breezily written, it is a hilarious celebration of our passions and their absurdity. Ostensibly the central subject is stamp collecting, but it is also about obsession, nostalgia, and our relationships with the things we collect. It rises above the comic by its honesty and personal reflection - stamps become a metaphor for bigger and more universal issues. A book that makes you smile as you read.
Some other stuff too - Esther's Inheritance which I wrote about in Novella, Letters From Father Christmas by Tolkien, and I'm half way through Clock Without Hands by Carson McCullers - not a very popular author in the UK yet well represented in the Penguin Modern Classics. Waiting on the shelf are Kazuo Ishiguro's Nocturnes, Richard Holmes' The Age of Wonder, Albert Camus' The Fall and McCullers again, The Member Of The Wedding. 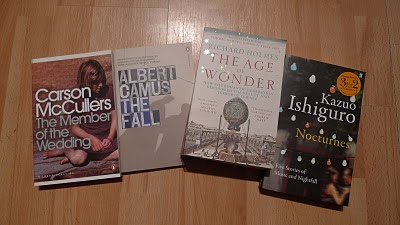 So lots to get through. In the meantime, the best books I've read this year?
Novels - Kazuo Ishiguro: The Remains Of The Day or Never Let Me Go - I can't chose between them.
Outdoor writing - Richard Askwith: Feet In The Clouds - a book about fell running and obsession.
Philosophy - Alain De Botton: The Pleasures And Sorrows Of Work - his best book yet, very funny.
Politics - Tim Garton Ash: Facts Are Subversive - liberal, literate and hopeful.
Welsh writing - Jeremy Brooks: Jampot Smith - a nostalgic coming of age story set in Llandudno
Children's - Eugene Trivizas: The Three Little Wolves And The Big Bad Pig - superbly illustrated by Helen Oxenbury. Here is a sample: 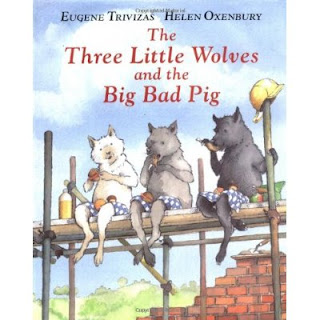 Happy reading.
Posted by The bike shed at 1:22 PM