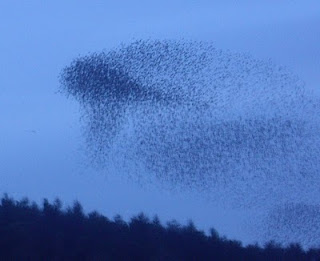 Starlings 27 Dec 09 - the dot above the trees, left of the starlings, is a Hen Harrier
Near my house in Wales is a starling roost. As many as three million birds return each winter's evening, many of them travelling more than thirty miles to rest overnight in a copse of fir trees on the south side of Plumstone mountain. The squadrons arrive in waves, forming dense clouds that swirl and twist above the trees - not dissimilar to those Attenborough films of fish balling and coiling in defence against dolphins.It is breathtaking to watch.
But why do they do this? Some say it is for security. Other say for warmth, or to pass on knowledge of feeding grounds. Yet none of these explanations seems sufficient. Why travel so far and expend so much energy? Why gather in such a large group, only to leave as individual squadrons at dawn? And why run the gauntlet of the raptors, waiting patiently on the telegraph poles or soaring above the trees. They picking off the stragglers, or, as last night, dive bomb the group and randomly strike for prey.
We can hypothesise over their reasons but, in truth, we do not know. Perhaps they simply have an instinct to return; like salmon returning to spawn and butterflies migrating across continents. Or like me, returning to Wales - seeking a sanctuary that is always worth the effort, logical or not.
Posted by The bike shed at 5:49 PM

Labels: About me, Wales