Marram by Leonie Charlton - a tale of coming through 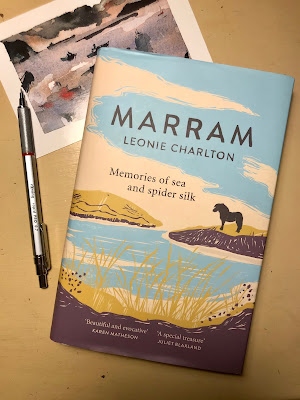 Sometimes coincidences are too many and too strong to resist. Just occasionally they're so close as to give rise to discomfort; the best resolve themselves into a fortuitous delight as if their happening —and our finding—was written in the stars.  I feel this now as I fumble my way into reviewing the excellent Marram, by Leonie Charlton.

It was the author's name that first caught my eye—there aren't many Charltons writing about nature. That she's also, like me, published by Cinnamon Press was coincidence number two. Having missed the online launch of her poetry collection (thanks to a traffic jam on the A40), I'd ordered Marram as much in atonement as surname solidarity.

The book recalls a journey Leonie made across the Outer Hebrides. Travelling with her friend and their two ponies, they trek from Barra through the Uists to Harris and Lewis. It's a logistically challenging trip, requiring ferries and route planning, the help of friends and fellow horse lovers...  Her prose is well crafted, lyrical but not cloying, and sufficiently sparse to leave space for our imagining of the wild places she portrays.

But if that were all Marram was, it would be yet another book on the pile of pleasant(ish) nature writing that now fills a table of its own in most Waterstones' stores. I'd feared it might also be a 'book about books' in the way that so many of the putative new-nature authors use the landscape as a foil to show how clever and literate they are. Thankfully, it avoids that trap.

Which isn't to say that Leonie's not astute or well read—rather, it's that in Marram she has the confidence of her own words and story, quoting others only for context or inspiration. One review on Amazon compared her writing to Robert Macfarlane but I sense more the influence of Kathleen Jamie, a far finer and more authentic essayist, and as it turns out, a tutor at Sterling University where Leonie took the MA course. Coincidence number three: studying writing a little later in life.

In travel and nature writing of any quality, there are always two tales. Firstly, there's the outer story: the getting from A to B, the paths travelled and the trials overcome; if there's a climactic tension then much the better, which is why mountaineering books can be so compelling. And then there's the inner story; the one which reveals why the journey has meaning, how it changes the author... the lessons they learn and the truths they find.  It's this reflective quest—not the physical journey—that's the reason we care, and which speaks to our lives, regardless of whether or not we'll ever visit the Scottish Isles, let alone with a horse for company.

This is the soul and strength of Marram.

Leonie Charlton set out not only to traverse the Hebrides but to come to terms with the relationship she had with her 'impossible' late mother.  The story of Marram is one of finding our strength and accepting our shortcomings—it's a universal tale of love and sorrow, and how to come through (not 'get over' or 'put aside'); of how we might leave our parents and yet be trapped by them too.

This was almost a coincidence too far. My book Counting Steps is a series of essays on the power of landscape and fatherhood, and more deeply, a coming to terms with the ghosts of my past. Leonie's mother wasn't violent like my dad, but she'd led a lifestyle and exerted an influence that had cowed her daughter's flourishing.  When I read the date of her mother's funeral I almost dropped the book—the exact same day as my father's.

But these connections are mine and not why I think Marram is so good. That's because of Leonie's skilful spinning of the threads of her life and the weaving of those into a tapestry of place and feeling; the recounting of a journey that's both physical and heartfelt. There's climax too, and tension in its unfolding; a coming through in more ways than one.

I'm conscious, in re-reading what's above that I've not said much about the trek, or for that matter the ponies—but in a sense, these are details and beside the point. I should say that on occasions the reading takes some effort, in part because the place names don't naturally sound in our heads; it's a problem with Welsh, but even more so with Gaelic. Aside from this, the twin stories progress with a pace and ease that belies their crafting.  It is beautifully done.

As a life writer, essayist and blogger I'm acutely aware that one of the hardest things is to write honestly of ourselves, but in a way that speaks to others. It's not really about me, I try to explain to those who ask. This little review is almost a reversal of that rule—but then I didn't write Marram. I just read it and felt the connections and am reeling from its elegant notes. Like those of the whisky from the Western Isles, they will linger a long while yet.