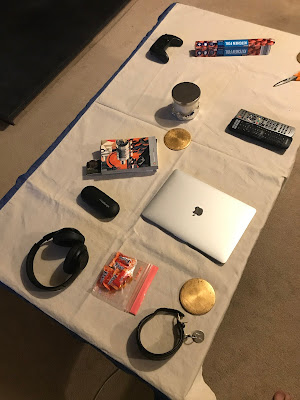 My workspace
As I sit on the sofa typing this post Storm Christoph is rattling the windows of the former pub in which I live. Jane is reading the weekend supplements and Oscar has settled in his snoozer bed, casting me guiltily looks in the way that whippets do. It's the fourth week of our third lockdown and inspiration is wearing thin... for the first time in my life I've taken to wearing loungewear!

Somewhere upstairs my son is having an online art lesson and he tells me that he too is short of ideas.

When I was his age, my mother - who was actually pretty good at these things - used to encourage me to draw still lifes. If I tipped out my handbag, you could sketch all that's inside, she'd say.  It's the sort of exercise that writers are given in workshops, inventing a narrative from random objects - finding a point from which to begin. Some say it's helpful to use pen and paper, connecting hand to brain with ink as the go between - I'm happier with my keyboard.

Most days I prefer to work in the living room, balancing a laptop on my knees as I settle into the sofa. There's a perfectly adequate study next door, with a proper desk and a fancier computer, but it feels too remote and rather cold in spirit. There's something about the nearness of the walls which I dislike - a place for admin rather than creativity.

Whereas here, in what was once the public bar, I can perch my feet on the coffee table and muse over what it says about these last few weeks.

You can't see the table in the picture above, which is a pity because it was made by a friend using old lock gates from the Brecon and Monmouth canal. Ironically, because it's so beautiful, we've covered it with a cloth to discourage Oscar from adding to its character as he teethes. His collar is there in the corner - you might be interested to know its a martingale design, which are especially made for sight hounds... or maybe not.

In the opposite corner are my noise cancelling earphones - they came free with the laptop and have been a revelation, but I'm guessing hi-fi isn't your thing, because it's not mine either. There's also some toffee left over from Christmas, a copy of George Orwell's essays, my reading glasses, a rip-off Jo Malone candle, and a Nintendo game controller that I have no idea how to use...

The TV dobbers are just as confusing and as for the foil - don't ask... I guess the scissors in the corner might spark inspiration for a novelist, especially if I'd added a few drops of cochineal to the linen ... As it is, they were used to open a parcel of foot moisturising socks which mysteriously arrived from Amazon this morning! That's as exciting as it gets I'm afraid.

Or is it?  Because if I look more closely I reckon I can find interest you'd miss.

What, for example, do you think would be the first object on the table I'd save from a fire?  Or - a more likely scenario given his guilty looks - the one I'd least like Oscar to chew to pieces! The expensive laptop?  Those gilded coasters?  Or that copy of Orwell's essays - a high contender for my desert island book of choice?

If you picked the latter, you'd be close but not quite... for it's actually the marker between its covers.

I made that bookmark on a rainy day so long ago that I've forgotten when. In all probability it began as a painting which for some reason was abandoned and later cropped to size. For years it lay in my desk by the pile of pens - maturing almost - too nice to throw out and yet, as my mum would say, of neither use nor ornament.

In the last decade or so it's been through more books than I could list. I rather wish I'd noted them down in pencil on the back. Quite why in pencil I don't know either. Perhaps because it reminds me of school, and drawing - and when I too was sixteen like my son and short of inspiration. The list would be tonic for the times - a trove of vision, wit and flair - just as the books on my shelves are now, though many will probably never be opened again.

It's strange to think of the objects we gather around us - how the trivial can acquire meaning, and the supposedly valuable lose their worth. Over Christmas I found a box of old photos; I think I took more joy from that serendipitous happening than I did from all that we'd planned. In a few frozen images I was transported back to times and events that have shaped me more deeply than any present ever can. For it's only with time that we know what matters and what's truly important.

As another day ticks by - and the storm passes over Wales - I'm trying to hold onto that thought. One day this lockdown will be a memory, just as Oscar chewing the furniture will be too. Orwell's essays will no doubt still be my favourites - and the contents of our coffee table will be a prosaic as ever. I wonder too, how many more books that marker will see before all this is behind us, and if anyone will ever cherish it as much as I do. 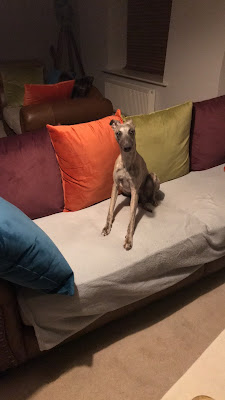