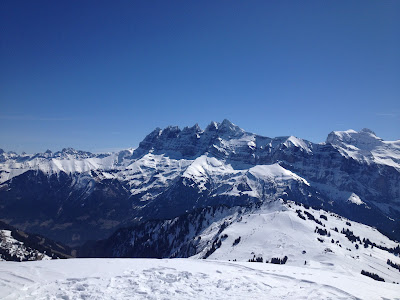 Not the Hahnenkamm but you get the idea...
This weekend saw the staging of the Hahnenkamm downhill at Kitzbuhel, ninety years since it was first run on the piste known as the Streif. The race is the hardest and most dangerous on the World Cup circuit and I realised, as I settled down to Ski Sunday, that I've been watching it for just over forty years.

In itself, that's not so exceptional, after all I've been following the Grand National for longer, and every four years we all of us become armchair experts in the obscurities of the Olympics. I remember once saying to a work colleague that a contract we'd secured would straddle the next two World Cups - he laughed because I'm not known as a football fan. But even for someone of moderate awareness, sporting events have become markers in our calendars; like secular saints' days that remind us of the passage of time.

It's arguable our interest is disproportionate: that commerce has distorted sport's value and laid waste to its roots; that too often we're spectators and not participants... There's much truth in these insights, but as with most pleasures, a healthy balance and a little moderation won't steer us far wrong - though I draw the line at professional wrestling!

Returning to the Hahnenkamm, this year's staging was a double header. The previous week's downhill on the Lauberhorn had been cancelled due to the pandemic, so there were two chances for gold, though it was Sunday's race which carried the biggest prize. Not that it mattered to Beat Feutz, who won both, recording the fastest time on the course in over a decade.

Which is sort of interesting and yet isn't. Because as a spectator you'd frankly not know the difference between competitors if it weren't for the clock at the bottom of the screen. Victory margins are measured in hundredths of a second, and seldom does anyone win by more than the time it takes to say Streif, let alone Hahnenkamm.

In truth, it's all about the spectacle - and the tension too. We cheer our heroes and our own regardless (and in downhill skiing not even that if you're British) but mostly, we just watch in awe. The other week I said to a friend that there are very few things in life I'd truly love to have done but know I never will. They included surfing a tube at Hawaii, scoring a decent break at snooker and skiing the Hahnenkamm at speed.

These are the dreams we live vicariously.

Psychologists say the reason we get so excited when our team scores a goal (or a try or a touchdown...) is that at some primal level it's not them scoring, but us. We become the player; we're on the pitch... Have you ever noticed how football fans refer to their clubs by saying 'we'; it's much the same with the Olympics and Six Nations. Sport immerses us 'in the moment' - at least by proxy if not in reality.

But as with so many of my interests, I sense there's more to my attention than the present.

It's a curious phenomenon that our most vivid memories are often of times and events that have acquired a significance out of all proportion to their importance in our lives. My earliest memory of the Hahnenkamm takes me back to a student house in Leicester, where we'd gather every Sunday to drink beer and watch Franz Clammer and Peter Muller going hell for leather at Val Gardena, Wengen and Crans Montana. Those courses are still on the circuit - their names a sort of poetry to my winters.

Strange isn't it how I remember all this from years ago but couldn't tell you who came second at the weekend - nor can I recall the hill from the time I went to Kitzbuhel.  I followed the Hahnenkamm race for thirty five years before I learned to ski and I'm sure the real reason was that it took me back to those formative times.

Jane worries that in watching it today my mood will darken, reminding me that we won't be going to the mountains any time soon.  I should try to reassure her.  Tell her it's not so much what I'm missing that motivates me, as a subliminal urge to connect to the past - and in so doing, place the present in perspective...

Except when I put it like that, it all sounds a bit bollocks.

Much easier to say the Hahnenkamm is a simply spectacular; that it takes my mind off the grind and gets the pulse racing.  Either way - whether moment or memory - it's one of the milestones of my winter.  As is the shortest day, the coming of snowdrops, and indeed, the theme tune of Ski Sunday.

Labels: About me, Sport