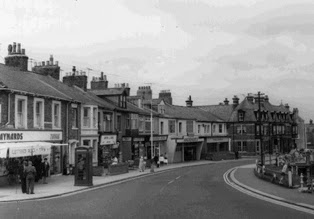 Occasionally I look back in my notebooks and am surprised by what I find. Here's a piece I found today, written over ten years ago. Though I'd craft it differently today, it still made me smile.

A while ago, I returned to my home town - for a meeting at the headquarters of a small chain of newsagents. They're opposite the old Classic cinema, at the top of Monkseaton Drive. I arrived without missing a turn; once worked for them as a boy.

It's twenty five years since I’d been to that cinema (to see Rollerball on a Friday night with Louie) - it's closed now of course; long since boarded up. After the meeting, I drove to the sea, past new estates with unfamiliar names: Ocean Court, Redlands Farm, Priory Mead - the fields gradually giving way.

The seafront wasn't as I remembered. The Pitch and Put, the Lower Prom, the Esplanade, the Spanish City, (memories of Dire Straits and school discos) – all shabbier now; not so much flaking-paint, as a general gaudiness - cheaper, tackier...sadder.  And smaller too; it had all seemed so much bigger back then.

There’s a one-way system in town; it takes you behind Woolworth's, past the bus station and Morgan’s hardware store (still there!) to avoid the new pedestrian centre. I looked for old friends and realised, with mild surprise that, of course, they’ll be older now - mothers with children, men in suits, electrician’s vans.  There are no familiar faces.

But as I stop for petrol, there's the accent of the girl in the kiosk...

Nostalgia washes over me, as I start the long drive south.
Posted by The bike shed at 10:20 PM