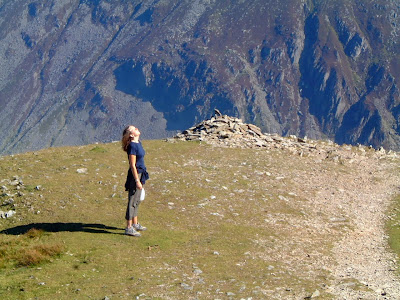 Because it's there, is the line attributed to George Mallory, answering the question of why he wanted to climb Mount Everest. It's probably the best known summary of what drives mountaineers.

That's understandable because the quote is a memorable and witty encapsulation of an urge which is beyond the comprehension of some. It also works at a deeper level, in hinting at the sense of adventure, the pull on our imaginations, which mountains evoke.

A strong candidate for the opposite of Mallory's line is the quip I must have heard a thousand times - there's a path round the back you know! Not only is this not witty, it hints at nothing but a lack of originality in the joker who called it out.

I'm being unfair in that last paragraph, for while it's perhaps best to grin politely at the wags, it's more difficult to answer their underlying question - why are you risking so much on something so intrinsically pointless?

The problem with the Mallory quote is not that it's wrong, but that it's incomplete. The motivations for climbing are many and complex, and no soundbite is ever going to be a credible answer.

Alfred Wainwright said that we climb mountains, not for the view from the top, but from below. I understand his point - climbing a mountain changes our perception of the landscape. We look differently at mountains we have climbed - we have association, familiarity, a shared history.

There are other reasons too - for bravado, for status and pride (at national and personal levels); popular at present is raising money for, and awareness of, good causes. The recent proliferation of 'adventure sports' draws on these and many similar motivations.

But as explanations, they remain incomplete.

For in my view, tackling all but the most casual of mountains, involves an inner as well as an outward journey.

It's well understood that the hardest routes require as much composure as physical strength. But 'control to power' is not what I'm getting at.  Rather, it's the counter-intuitive fact, that by being so physically all-consuming, climbing gives us a space to reflect and rejoice - to feel more alive - that is so difficult to find in our daily lives. At its best climbing helps us come to terms with the world and our place in it.

In a sense, we climb not because it's there - but because we are here.
Posted by The bike shed at 8:53 PM