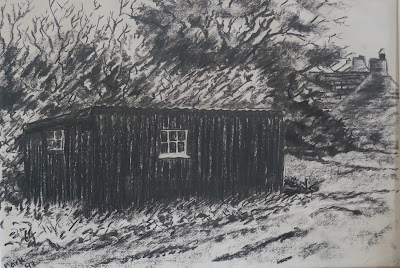 Last week on BBC's Autumnwatch a viewer sent in a photograph of some moth eggs. The presenters couldn't identify them, so they asked for experts to email the answer.  As this was happening, one of the crew suggested that years ago they'd have let the eggs hatch, reared the caterpillars, and arrived at the answer the hard way.

At which point Chris Packham made an aside which struck me as interesting. Yes, he asserted, and that's the difference between acquiring knowledge and simply finding information!

My first response was negative.

I'm suspicious of the rather Protestant notion that information which isn't hard-won is somehow less valuable than that which comes more easily.  In the early days of the Internet this view was especially rife - but who would want to go back to the days when Encyclopaedia Britannica was the oracle?  And how many of us went along to the library every week to turn its dusty pages?

But as I reflected I softened a little.

Not least because I was one of the nerds who actually raised the caterpillars. I also drew and photographed them, wrote details of their development, and ingrained on my brain, details of their lifecycle and physiology that I'd have long forgotten if acquired in seconds from a website.

Drawing is a particularly apt analogy.  John Ruskin said that its purpose was to train the eye and not the hand - and he's right. I know of no better way to understand at an object than to render it on paper - photography doesn't come close. Interestingly, almost any book on amateur astronomy will recommend that the enthusiast draws what they see through the telescope.

The point about drawing is that it requires intense concentration - as does philosophy, and writing..  any activity which fully absorbs us. I'd bet musicians and mathematicians and athletes experience something similar.  And it seems to me that there's something about that process of immersion which allows 'information' to transcend into what Packham calls ' acquired knowledge'.

Before writing this post I looked at some of my old sketchbooks. They still arouse vivid memories, not only of the subjects but of when and where I drew them; how I felt at the time.

That is knowledge of the deepest kind and something which Google - or Autumnwatch for that matter - can never begin to equal.
Posted by The bike shed at 3:58 PM