January makeovers... with a pinch of Aristotle 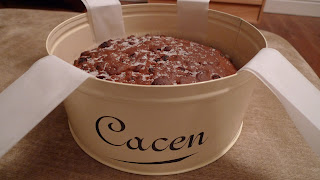 Cake - one of the nicest presents I received last year - but not in January.
There's an often quoted fact in my industry that December is the best selling month for food magazines and January the worst. You'll not be surprised that the trend is reversed for slimming titles. Television has its equivalent: celebrity chefs make way for the Greatest Loser and adverts for Christmas delights are replaced by weight-watchers and nicotine patches. We've come to expect this - because of course January is a time for resolutions and makeovers.

I'm no different - each year I jot down a few positive goals and do my best to achieve them. Last year I wanted to complete my book, finish my writing degree and not waste energy on crap TV, negative people or conversations I've heard a hundred times before. I did okay, but there's still work to do. I have a similar list this year.

And typically that involves getting a little fitter. I say typically because when I asked around the office, everyone said they wanted to lose weight and/or do more exercise. This week at the gym there was the usual influx of newcomers carrying programme cards or accompanied by a personal trainer. Again, I'm no different - I've spent more time on the rowing machine since Christmas than I did the entire autumn.

It's hardly an insight to say that we have an obsession with our looks - and weight in particular. The idea of the 'perfect body' as a prerequisite of happiness is ever more ingrained in our subconscious, at times insidiously so. Peddling away at the gym I watched a ghoulish documentary about a 72 stone woman - but more disturbing by far was another concerning a child of six who's been diagnosed with anorexia.

In my discussion with friends and colleagues I've heard three themes to our resolutions - weight and fitness (including less drinking and smoking), debt (less of) and travel (more of). On the basis of my straw poll, it seems our idea of the good life is being stick thin, mortgage free, and able to holiday at will.

Put like that it doesn't sound too bad - and let's not get pompous, most of us envy those in that position - but it's interesting that not a single person I spoke too said they want to read more, even those given Kindles for Christmas! Nor did anyone say they wanted to go to the theatre, get less angry, have more courage, help others, or make a difference. Aristotle who believed the good life lay in demonstrating virtue would be turning in his grave. David Cameron's Big Society didn't get a look in.

The funniest resolution I heard was someone who said they wanted to stop picking their nose in public. And the saddest (to return to my theme of an obsession with makeovers) was when one of my fittest friends claimed they needed to train harder and lose half a stone - for what? for whom? I need to be careful though - for my own list was equally self centred in its way.

But perhaps this is just the stuff of New Year resolutions, and by the time Spring arrives we'll all see things in better perspective. This week I began the planning for my company's Community Programme - and looking back over last year I was reminded of the hundreds of colleagues who did something special - for others as well as themselves. In some cases that was genuinely life changing (one couple found love on a bike ride!) in others it was less dramatic, but a highlight of their year nonetheless. When the narcissism of January fades I've no doubt there'll be new people coming forward - and hopefully (me included) we'll remind ourselves that there's more to a good life than the magazines and TV would have us believe.
Posted by The bike shed at 11:13 AM

Labels: About me, Bike shed philosophy