A sense of wonder 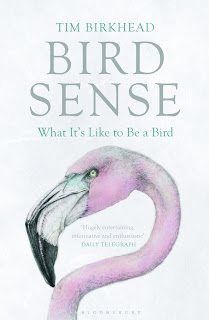 An underlying theme of the nature symposium I attended last week was a sense of wonder. One speaker introduced the day by reminding us that the word is used in different ways: we wonder about things as in curiosity and enquiry; and we wonder at things, in amazement, awe and disbelief.

Tim Birkhead is a lecturer and scientist who studies avian ecology- he encompassed both these concepts in what to me was the highlight of the meeting. His soon to be published book Bird Sense: What it's like to be a bird explores the extraordinary abilities of birds to perceive the world in ways we can barely imagine.

We've known for a long time that many species can focus at a great distance, picking out detail with a clarity our best lenses can't achieve. We know too that some raptors, Kestrels, for instance, can detect the ultra-violet trails of rodents - experiencing what to us would be a 'new' colour, a concept that has fascinated me since I was a child.  But to learn that some can also visualise magnetism, left me incredulous.

Birkhead explained that in studying migrating birds, scientists found the presence of magnetite in their beaks and brains; this compound of iron oxides allows them to orientate to the earth's magnetic field, a process known as magnetoception. But more recently they have also discovered that some birds synaptically connect the magnetite to one of their eyes (usually the left one), literally seeing the earth's magnetic fields.

When you think about that, it is just astonishing. It makes our human abilities seem so limited, exposing our perceived 'superiority' as the hubris it is. Consider how long it has taken, what effort and technology we have had to develop, in order to simulate what geese can do without thinking.

There was more to wonder at too. I never knew that Kiwis used their acute sense of smell to locate worms with absolute precision. Or that many owls have one ear at two-o-clock on the dial and the other at seven - and are able to locate prey in total darkness with one degree of accuracy vertical and horizontal. I could go on, but it would only baffle us further.

I was curious too about the wider implications. For here science touches on philosophy, by illustrating just how limited our own perceptions and experiences are. Emmanuel Kant declared we can never know the world as it truly is. Birkhead tacitly acknowledged this, and significantly he talked of how scientific knowledge allows us to 'judge' what it's like to have these senses - that's a very different thing to actually experiencing them.

Scientific knowledge is also limited, and Birkhead left us with some of the more mind bending natural phenomena we're yet to understand - how, for example, do migrating flamingos 'know' when it's rained at their target destinations, only starting their thousand mile journeys when enough has fallen? This and many other questions remain beyond us - a source of wonder in every sense of the word.
Posted by The bike shed at 12:07 PM