The world as it is 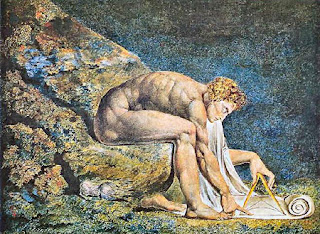 If the doors of perception were cleansed, everything would appear to man as it is, infinite. For man has closed himself up, till he sees all things thro the narrow chinks of his cavern.  William Blake

In yesterday's post about the senses of birds, I referred to the limits of our perception. It's not the first time I've mentioned this: recently I wrote of 'our essential separateness... from the world as it really is.' And nor is it a unique insight - Blake's quote above, beat me by 200 years.

But isn't understanding reality only a question of time?  Modern science is just three centuries old; given infinite resources, surely we could establish the facts. That's debatable, but for practical purposes it isn't going to happen in the lifetime of our species, never mind our own mortal span. I read the other day there are 125 billion galaxies - getting to know them is going to take more time than we have. And in any event, science alone would never be enough - it's one thing to know a bat uses echo-location, its quite another to actually live that way. Human experience will always be bounded - our eyes, for example, can observe less than one percent of the spectrum of light.

So if empiricism can't cleanse the doors of perception, might we do it conceptually? Unfortunately philosophers were amongst the first to understand the folly of trying. Plato talked of the 'world of Forms', an abstract realm of perfection - in his allegory of the cave he describes our sensory world as  shadows of reality. Bertrand Russell's Problems of Philosophy takes a more contemporary route to the same conclusion - when we look at a chair or a table, Russell explains, we experience it from one perspective and at one particular moment, never the whole in a timeless realm.

But is there any way we can get closer to reality, if not actually touch it?

Throughout history there have been - and I'm off on theory of my own here - perhaps three means of trying. The first is spiritual practice - worship and prayer of any kind is ultimately an attempt to reach beyond our situation. The second is hallucinatory experience, often drug induced - and sometimes, as in Shamanism, combined with with spirituality. I know little about either of these subjects, so I'm not going to say more. The third is art.

My tutor once described art as an attempt to connect with a world beyond us. Paul Cezanne said the role of painting was not to copy the object, but to make real our sensation in paint - in making a true response, he was saying, we create our own concrete reality. Leonardo da Vinci certainly believed his paintings were more perfectly real than the subjects he depicted. Similar claims have been made for poetry, music and literature, each of which can extend our perception beyond the five senses. Through art we perhaps don't open the doors of perception, but we can at least glimpse through the keyhole.

Returning to my opening lines, William Blake's life combined all three manners of trying - a divine believer, a visionary mystic, a poet and painter. He was a philosopher of sorts too - and for all I know  a scientist - I'd bet he tried a bit of alchemy. His life was a personification of the fine line between genius and insanity. But in the extent of his vision, and in that marvellous quote, he perhaps got closer than most to understanding the world as it really is.
Posted by The bike shed at 1:00 AM