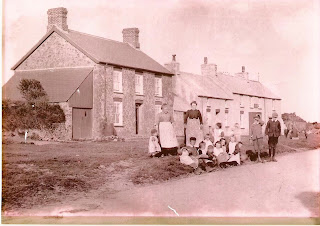 This is a photograph of my cottage (the house in the middle) - we don't know exactly when it was taken, but estimate early Twentieth Century, probably sometime before 1920. The lady on the right is my elderly neighbour's aunt and I especially like the chap milking the cow in the background, outside what was then a pub.

The lady with the children lived in the house next door. I was told that all fourteen were her's, but looking at the photo and estimating their ages, it seems improbable - though not impossible. My late neighbour Hirwen lived in a cottage that was across the green from where this photograph was taken - he was one of seventeen children.

My cottage has changed little compared to the lives of those who live there.  I doubt any in the photograph had ever left Pembrokeshire - yet I commute two hundred miles for weekends. When I bought the place it had minimal electrics, no heating or hot water system, no damp course...  the small connecting shed, now a posh extension, had been used as a pig sty.

I was thinking recently about the extent of change in the century before I was born - how unrecognisably different lives became over that time. In the Eighteen Sixties, there were no planes, no cars, not even chain driven bicycles - medical treatment was primitive, no antibiotics, no penicillin, no Welfare State, no nuclear bombs...

And then I was wondering how things might look in fifty years time - a hundred after my birth. I doubt the difference will be so marked. There were no personal computers in the Sixties, no DVD's, no wind farms (I promise not to rant) and our knowledge of say quantum physics was not as it is now  .. but much of what we take for granted was already there, even the space exploration programme had started. I read somewhere that the most significant advances in medical science had been made by the Fifties.

But as is so often the case, my thoughts were human-centric. Because for all our western lifestyles may not alter as fundamentally, the natural world will suffer more devastation than in any equivalent period since the Ice Age. The world's forests will be a fraction of what they were, our seas overfished, many species lost, arctic ice depleted... we know the story.

It isn't all bad - it's easy to romanticise about how life was when looking at sepia photographs. For all it was simpler, less stressful, and more in touch with nature -  it was also hard, cold and at times a hungry existence. Ultimately, I'm glad I was born in 1961 not a hundred years previous - I hope my boys feel the same way when they are fifty.
Posted by The bike shed at 1:00 AM