Julian Meredith - the importance of scale

All images taken from http://www.julianmeredith.co.uk


Although for many years I was a committed a painter it's been a long time since I saw works that made me want to pick up my brushes. Much of the art in commercial galleries seems little more than fancy decoration, and frankly, I've lost interest in looking. My loft is full of paintings that I can't be bothered to hang.

So how refreshing to be metaphorically hit in the solar plexus by the artist Julian Meredith. Giving a talk about his work he said, Reduced scale images are part of the reason why we now ignore images. And I felt that long forgotten rush of adrenaline (yes that's right) as the photographs of his life-size image of a blue whale hit my nervous system. 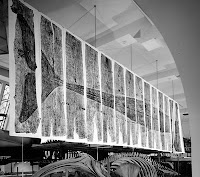 Meredith's comments about scale are wise. Size is a fundamental quality of any artwork, impacting on its meaning and context, its ability to connect with our senses. We've become used to paintings and sculpture that reduce our experience - and they do so more than just physically. The other week, I went to the Leonardo exhibition at the National Gallery, possibly the most over-hyped show this century - I don't want to be churlish about his art (oh for a morsel of that talent) but the vast majority of pictures were tiny; even the showpieces could have hung in my hall. Ultimately we 'peered' at the work - mostly over two dozens heads, jostling for a better view.

The whale prints were so large they were made in sections that bordered on the abstract, and as such had an individual quality of that goes beyond the whole. They were woodcuts, and I liked it that he's used an elm that was felled at Alnwick in Northumberland, near where I used to live. The choice of elm - a tree almost entirely lost in the UK - to make an image of one of the rarest and most endangered animals seemed especially apposite. So too, that they were hung at the Natural History Museum as a temporary replacement for the fibreglass model that is one of its iconic exhibits.

In fact the prints were quite small for Meredith. On his various residencies he has created sand sculptures, earth works in chalk and stone (he described the Cerne Giant and Uffington White Horse as two of our greatest works of art), including a 400 white whale near Cardiff. His works are so immense that its possible to become fascinated by how he makes them. But as he so rightly pointed out, (he was almost irritatingly insightful) we should be careful about the value we place on process - it is the image that matters.

That said, everyone at the lecture was taken aback by his descriptions of print making directly from fish and swans - dipping their bodies in ink and pressing directly onto paper. In answer to a questioner he explained that one swan might suffice for eight to twelve images - and no, he didn't kill them himself but used donated specimens.

Julian Meredith is the first visual artist in many years to truly spark my imagination. It's curious that I've always been interested in both very small and very large works of art. By the end of my painting 'career', I was working on postcards and pictures that were fifteen feet long - unsellable images that I would sleep beside, so that on waking, they'd fill my eyes. I'd not thought of them in years, but last week I realised I'd soon have some time on my hands... 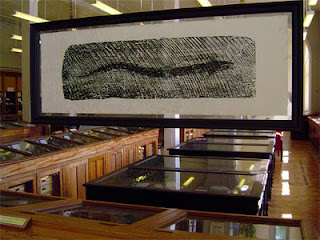