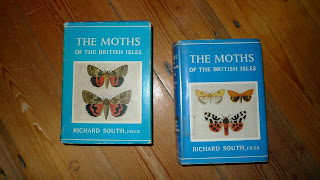 The inside cover of my copy of The Moths of the British Isles - Volume One is an inscription which reads: A small memento for a great achievement. To Mark, August 77 - Mother. I could write a book about the subtleties contained in that sentence but for now, let's just agree it was a strange present for a sixteen year old boy who'd recently passed his O-levels.  Even stranger is that I requested it.

My copy of Volume Two has a library stamp from my secondary school, which probably means I accidentally on purpose 'forgot' to return it - but then I doubt it was missed. After all, there are not many teenagers who care about the classifications of the larentiinae, ennominae and arctiinae families, let alone details of their lifecycle including illustrations of the ova, larval and pupal stages.

But such are the joys of the Wayside and Woodland series - they bridge the gap between hard academic books and more popular guides, satisfying the knowledge cravings of serious nature nerds - be they sixteen or sixty one (which at the time seemed ancient).  Until recently many of the series were considered the definitive field guides, and still today the two volume  Beetles is the most comprehensive pictorial reference available.

Wayside and Woodland books were published by Warne, who also produced the popular Observer's series that were a ubiquitous feature of Sixties and Seventies households. Much of the content of the Observer's nature titles is taken from their weightier cousins, and in a delicious irony, there is now even an Observer's Book of the Wayside and Woodland Series.

The reason, of course, is that they have become collectable - the rarest titles selling for hundreds of pounds, with value determined by condition, presence of a dust jacket... all that guff. For me, the value lies is in the content and occasionally in the past owners who have left their mark.  I have a wonderful copy of Dragonflies that includes the detailed observation records of  Lt. Col. Cowan and his correspondence with the book's author Cynthia Longfield (known in entomological circles as Madame Dragonfly). 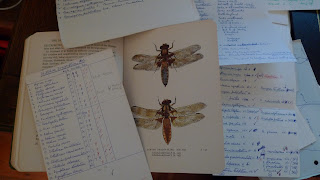 I also have copies of, Trees, Freshwater Life, Butterflies, Blossoms (3 volumes), Birds (3 volumes) Caterpillars of British Moths (2 volumes) and Butterflies, Animals, Shell Life, The Seas... and my favourite Practical Entomology. I have more than these but not quite a full collection (Bees,Wasps and Ants is missing, as is Flies and Fungi and the elusive and over priced Beetles) not that it matters, I don't covet a full set so much as I like using them.

It's a pity the Wayside series was discontinued after Warne was bought by Penguin. The series had been in print for decades with the more popular titles subsidising obscurer interests and the whole forming a comprehensive guide to British wildlife. I don't think there is a mainstream publisher with an equivalent ambition and commitment today.

Only last week a friend was commenting on how the days of working class lads collecting bird's eggs had long gone - and that whilst the protection of species is a good thing, he sensed that an interest in nature is becoming an increasingly middle class pursuit. I don't know if that is right - it is almost certainly true of nature writing -  but if so, the absence of affordable and accessible guides is perhaps a contributor.

Thankfully, there are still many copies of the Wayside and Woodland Series available - and if you're not fussy about first editions and cover jackets there is a world of nature that can be enjoyed for only a few pounds. That copy my mother bought me when I was sixteen cost £6.95; you can probably get one on eBay for the same price - and that has to be a bargain.
Posted by The bike shed at 8:57 PM