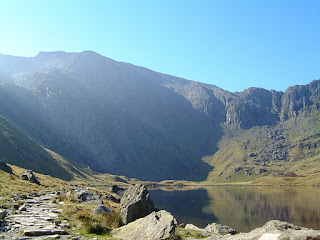 If I was forced to pick a single place that meant more to me than any other, Cwm Idwal would be a high contender. It is in the Ogwen Valley, a few hundred feet above the main road to Bethesda, on the path to Twll Du, the Devil's Cauldron and Glydyr Fawr mountain. The Cwm is a hanging valley, glacial in origin and now a protected site of natural interest with particularly rare plants including the Snowdon Lilly

It is also of interest to mountaineers - the Idwal Slabs have provided an introduction to thousands of novice climbers and the surrounding cliffs are home to many test pieces, including the aptly named Suicide Wall.  Years ago I climbed these routes and can still picture the individual moves, the precarious belays and the long loose descent into the gully to the side of the rocks. 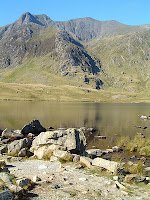 I remember the day we found a rose wedged in a crack, with a note from a girl whose boyfriend who had died in the Himalayas. It made Jane cry. We were there to go climbing but came back despite the sunshine - somehow, it didn't seem right. And I remember too, the afternoon of our wedding day, when we walked to the Cwm in pouring rain and held each other on the rock where we'd kissed three years previous, and known it was more than an office romance.

We've been back many times since - the photos in this post were taken in September 2002, on our anniversary as it happens. The other year we took our boys and stood on the same rocks as they turned away in embarrassment - yukeee they said!

That's teenagers for you. But then one day they will probably be an old romantic just like their father. And if they are ever inclined to kiss a girl in a magical place, then Cwm Idwal will still be there, waiting and as wonderful as ever. 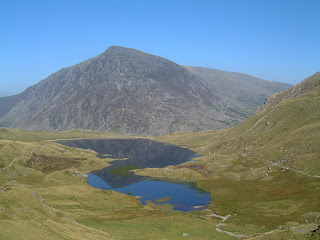 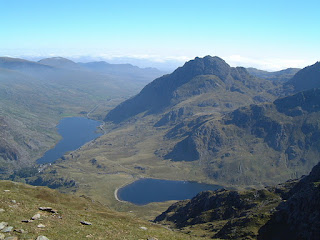 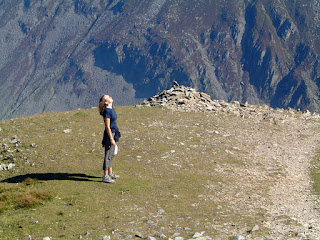