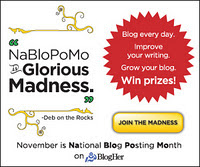 I've been relatively silent of late, a bit down in the dumps about the blog. The course I was due to run had to be postponed because of some last minute cancellations - apologies to those who'd signed up, but it will definitely run next year. And then the weather turned just as I was thinking I'd have time to gather some writing material in the mountains - so annoying.

I've also been working on my book manuscript (due end November and closing fast) and suffering what I hope is an entirely normal last minute crisis of confidence. Last week I spent four days editing and re-editing, and I wasn't sure the result made that much difference - so disappointing.

'Why don't you take a break,' said Jane. 'Yes,' agreed Dylan, who suggested I take him to see Real Steel instead of writing all the time. Turns out Real Steel is a movie about robots bashing each other - mmm. I'd already spent Friday night having a 'sleepover' with Dylan in my shed (it's now become 'our' shed) and suffered a bad back, chilled feet and two hours of cartoons before he eventually dropped off. So - well actually it was great fun.

And yesterday I thought, what have I been whinging about? My mother is about to have her knee replaced (yuk), I heard of a fellow blogger who is very ill and another who was trying for the umpteenth time to get an agent to look at their excellent work. November is even a relatively slack time at the office, and for me it forms a watershed as I start in a new, less stressful and more interesting, role at work.

So what the heck, be positive I thought and sign up for NaBloPoMo. After all, it's only a blog a day for thirty days - on top of a new job,  finishing my manuscript, attending a nature writing weekend, nursing my mother (Jane, ten times more than me to be fair), giving a talk about blogging to Pembrokeshire libraries (you'll hear more about this soon) and the Christmas preparation that seems to get earlier every year.

I'm planning vaguely on a theme of 'nature' and will try and limit it to between 300 and 400 words a day - but don't hold me to that precisely. What I won't do is write in advance unless absolutely necessary, because to me, that defeats the object. I want to fit it in around my life instead of carving out chunks of time. And I need to learn to write more quickly.

There are others doing the November challenge too - Zoe, at Mind and Language is writing about art that inspires her - and you should definitely take a look. So far there are nearly 400 bloggers who've signed up; there'll be many more by the closing date and even more who do it unofficially.  If you're going to take part then let me know because it's good to share encouragement - last year there were about half a dozen of us swapping comments and suggestions throughout, including one of my blogging heroes and neighbours, Michelle at Veg Plotting.  She even brought me some jam to keep me going!.

So enough of this rambling on, you'll have more to cope with in November.  And in any case, I'm off now with Dylan to the cinema... Real Steel, here we come.