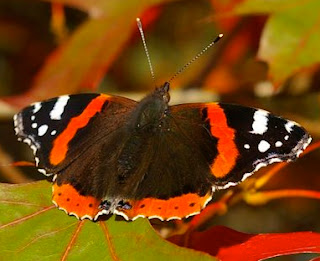 
Sunday morning at midday and I'm sitting in the car with drizzle spotting the windows when what should land on the wipers but a red admiral. It's possibly the last 'on the wing' butterfly I'll see this year - there will be some that hibernate in my shed and of course there will be chrysalises too, but neither of these are quite the same.

The red admiral is for me one of the quintessential English butterflies. It's arrival in Northumbria, where I lived as a boy, marked the start of summer holidays. Along with peacocks, tortoiseshells and painted lady they would feed on the buddleia bushes in our avenue and we'd try to catch them with nets made from bamboo poles and old lace curtains. They're a butterfly that makes you stop and admire (it was for a long period erroneously named the red admirable), even allotment gardeners don't chase them away.

In fact, the species is not really English at all - it's a migrant that rarely survives even our milder winters - after last year's cold snap it's doubtful the one I saw came from anywhere other than the continent. I suppose it could be a second brood - some of the early arrivals breed in spring, their larvae forming web nests on stinging nettles. But the emergent adults then have to face the winter, a few choose to fly south.

I read the other day that in Welsh their common name is y fachtell, which I think means the cloak. With its black and red forewings, I've often thought the butterfly has a vampire look - so perhaps the day before Halloween was an appropriate time to see one. In the event, it drank only from my windscreen!

This year has been poor for butterflies and moths, but the warmer autumn has given a late surge and as always there are exceptions - the hummingbird hawk moth had a bumper year. A migrant too, over 11,000 were recorded this summer. The other week on the coast path I saw dozens of small coppers, a delight of colour in the September sun. And I saw a painted lady on our anniversary, the only one this year.

Next time you see a red admiral, consider its journey and think again about how robust these deceptively delicate creatures are. Alternatively, you could smile at the answer a pal once gave in our secondary school quiz. What's a red admiral? was the question. To which he replied, It's an Indian Sailor, sir.  Given that some of them come from almost as far, he wasn't entirely wrong.
Posted by The bike shed at 1:00 AM