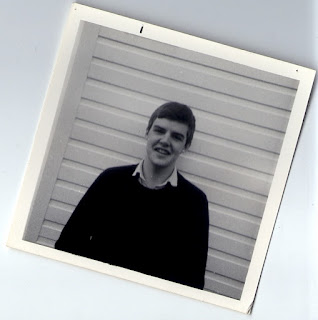 I have a vivid memory as a teenager of deciding that life didn’t properly start until you were eighteen. I’d lie in bed and count the months I had to endure - calculating what percentage that was of the ‘sub-life’ I was living. Reaching eighteen was about as far ahead as I could imagine (though back then the idea of being twenty one still held some illogical significance). I doubt if I ever calculated the months to reaching thirty; that was as good as infinity. My ‘proper life’ would stretch on for ever... if only, that is, it would hurry up in getting started.

And yet somehow tomorrow it is my fiftieth birthday - and that picture seems at once a day and an age away.

Shorty after it was taken I left home. I spent three years as a student and have long regarded that as the period I truly grew up. But thinking now, what about my first job, my first house - all the things I listed above - aren’t those times just as significant? I hope never to stop learning, to facing the new or seeing the world differently - and in that sense, never to stop coming of age

I was given a birthday card this week - it proclaimed fifty was the new forty, some wag even suggested ‘thirty’. I hope it’s not. Because for one thing, the older I get the more comfortable I’ve become, not so much materially or even physically (though my waistline’s certainly more relaxed these days), but in my own skin; in my sense of being me and being confident with what that means. Youth has it’s delights but it also has its uncertainties and pressures - in my case it was dominated by anxiety and a sense of being deeply alone. It took me another eighteen years to admit that to anyone.

And so being fifty doesn’t seem that bad. It feels to me (and allowing for a few ups and downs) that life’s getting better, not worse. Despite what we read in the news, I’d argue that’s true for most of us - there's more freedom in the world, better health, information, nutrition, education.. just about everything bar pensions and wind-farms (sorry, couldn’t resist and don’t want to get too serious).

When I said this to a friend the other day they replied, 'but wouldn’t you like to be eighteen again, except with all you have now’.

Leaving aside the impossibility of the wish, I’m not sure I would, for it devalues the journey. Sure, I’d like to live longer; I’d love to be fitter and wish I still had my hair - but I wouldn’t gamble what I’ve had for another chance at life. I look at my children, at Jane, at where I live... and I feel extraordinarily privileged.

And with a little luck and grace, there'll be more to come.
Posted by The bike shed at 10:15 PM