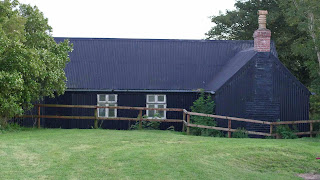 For all its other qualities Pembrokeshire is not awash with grand architecture, at least not in the usual sense of that term. Much the same could be said of Wales. There are many reasons for this: the quality of local materials; a low wage community that prioritises economy over fancy design; and in the case of Pembrokeshire, the Atlantic weather which eats away at any structural weakness.

I read somewhere that Jan Morris had declared the quintessential Welsh building to be the farm. That's a good shout; it certainly isn't the castles, most of which were built by the English and in any case are largely in ruins. I'd add the chapel, particularly those Methodist tradition tabernacles which stand austere at the centre of most villages here abouts.

But a third, and often overlooked contender, could be the tin village hall. These are not unique to Wales but there's an abundance here that helps to define the place. Often they were attached to churches but the community would use them, if not quite seamlessly, for both religious and secular purposes. My late neighbour gleefully told me tales of Saturday night shagging behind our village hall - of course, there was a Sunday School too, he said.

Tin halls and churches are having a resurgence. There's some that are listed buildings, others have been converted to holiday homes; occasionally a tea room, an artists studio... They're a popular motif too: on postcards, paintings, tea towels - there's even a coffee table book of moody photographs called Tin Tabernacles.

Until recently our hall was open to the wind; House Martins had colonised the rafters with their pulp nests and in the cupboards you could find posters for the Silver Jubilee dance, paper plates in red white and blue. There was a sink unit holding white china crockery and a water boiler with a two pin plug.

Three years ago the church sold it off. It was bought by a local farmer - he's had it repainted, sealed the doors and otherwise left it alone. In a way I hope it stays that way. Better that than being replaced by a rendered bungalow.

It's easy to become falsely nostalgic about the heyday of these buildings. The sense of community the halls embodied and sustained has waned; in most places it's long gone. In isolation that's to be lamented, but the reality is that few us would opt for the life choices of those who built and used these glorified sheds. On a tangent, I once bemoaned the loss of the simple youth hostels in Wales to which a trustee replied that the visitors had stopped coming long before the hostels closed. There is an equivalence here, but let's not get too embroiled in politics and social history.

Few visitors come through my village unless they're lost. Those that do tend to be looking for the old church with its arts and crafts rood screen; most walk past the hall on the green without a glance. That's a pity, for in the right setting these tin structures are some of the finest and most typical architecture of Wales. 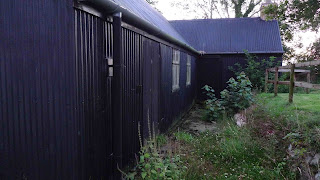