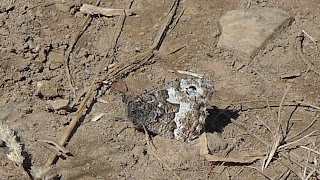 Of all the British butterflies my favourite has to be the Grayling. Blink and you'd miss it. Indeed, look hard, really hard, and you could miss it too. For the Grayling is the master of camouflage. Yesterday, on the path between Abereiddy and Penclegr, I showed one to a walker; my finger was three inches from its wings before he could spot it.

When I was teenager I kept a list of butterflies I'd seen. It wasn't long, not least because I lived in the Northumbria which is too far north for many species. With my as bike the only means of transport my range for exploring was also limited. Nonetheless, I had a second list: of butterflies I might see. And the Grayling was always up there in my mind, for it's colonies tend towards the coast and we lived only minutes from the dunes.

As it turned out I saw my first Grayling in the Alps; it was basking on a rock above the Col de Forclaz near Lac Leman (about as far from the coast as possible in Europe). At first I thought it was a Meadow Brown, but the moment it closed its wings I knew, for the distinctive V shaped markings had been etched in my collecting brain for twenty five years. I remember skipping with delight, tipping out my rucksack and scrabbling for my camera before it flew off.

In fact, it's not an easily spooked butterfly; quite often it will sit for minutes, leaning toward then away the sun, a behavior which evidently regulates its temperature. The Alpine Graylings are larger than those in the UK but variation is common - there are six sub species in Britain alone - and, frankly, it didn't matter to me; I'd seen one at last.

Of course, once one come along, then more follow. So it was in the Alps where I found dozens, and also back here in Wales; that same summer I discovered them three miles from my house. The largest colony I know of is in the shallow valley behind Carn Llidi, at the tip of West Wales. Amongst the bracken and heather are clusters of pale granite boulders, covered in lichen and perfect for both heating and disguise. Of the thousands of walkers who stop there for picnics I'd bet less than a handful notice the ginger flickering on the rocks, the slow turning of wings from left to right.

This year there are more than usual, and I've seen them further afield too. They are almost certainly breeding in pockets along the entire Pembrokeshire Coast, though numbers will vary and August is the best time to find them. The secret is to look very carefully; very carefully indeed.


****
The National Trust is running a love butterflies scheme, just tweet the butterflies you see, together with the postcode of the location and the tag #lovebutterflies
Posted by The bike shed at 10:43 AM