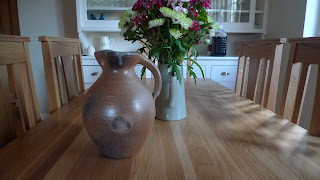 On Friday I bought a water jug. It's quite large as jugs go, stoneware with an earthen finish, glazed green inside; it was made by a potter whose name I've forgotten but I recall sounded Swedish. The jug was on display in the David Mellor factory in Hathersage. As we browsed the shop I kept going back to pick it up, judge it's weight and feel the curve of the handle; when Jane walked back to the car I quickly bought it.

'That's a lot for a jug,' she said, when I told her the price. A little defensive, I pointed out that our dinner for three (in a Beefeater steakhouse) would likely cost as much and we'd not think twice about that. And whereas the dinner would be forgotten by tomorrow, I might use the jug for years; keep it for life even.

For me, this is an increasing state of mind. As I get older I find myself buying objects that I don't as such need, but that strike me as beautiful, and useful - items that might give me pleasure every day. Not many are as pricey as the jug; I bought an antique toffee tin the next day for two pounds and the most gorgeous writing slope for forty (it will house my laptop and a plethora of 12volt chargers). Few cost more than a fill of petrol.

I'm conscious that to some that last comment might appear flippant; lots of people can't afford to fill their car at a whim, and I'm deeply fortunate not to have to count every pound. I could give all manner of justifications but deep down I suspect I'll always be sensitive to the privileges I enjoy; hard earned or not. And in truth I'd not wish to change that - it's a safety valve that helps me take as much pleasure in owning (relatively) simple things as some seemingly get only from way more expensive purchases.

In my loftier moments I like to think that I'm following in an Arts and Crafts tradition; surrounding myself with objects that exhibit a truth to materials and a sense of craftsmanship that makes life a greater a joy. Certainly, there's an honesty and utility to jugs and the like that you seldom find in the fine arts - much though I love paintings, they are by their nature 'on display' rather than in use. But in truth my purchases are less consistent philosophy and more that I'm periodically confronted by objects of desire I simply can't resist.


Years ago my father in law said to me that the best thing about becoming a headmaster was being able  to afford any book he wanted. His point was that not sweating the smaller pleasures was a greater delight than affording a bigger house or a new car, the so called and more stereotypical trappings of success. It has always struck me as a healthy approach.

I like books too and Amazon's 'buy now with 1-click'  could easily be one of my more serious vices. Thankfully I have it under control. So too is my buying of pottery. Or at least I thought so - for the next day, when Jane wasn't looking, I bought a jar for no other purpose than to look at! 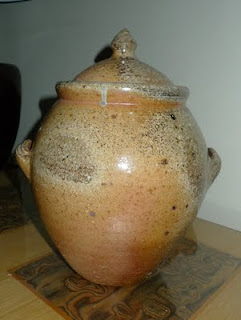