Wet monday and waiting for the postman 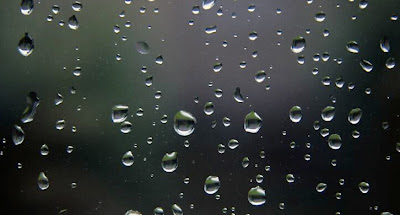 I'm on holiday this week and it's pouring. And I mean properly pouring; the decking swamped, the sky a soggy lilac, next door's cat sheltering in our outhouse. It's going to stay all day. Meanwhile Dylan is beside himself because the postman hasn't arrived. He's been up since six-thirty waiting for the knock on the door that signals the parcel from Amazon. If I suggested going out, it would tip him over the edge.

So it's a miserable day and we're stuck in the house. A few years ago I'd have been swearing at the clouds, insisting we 'get on and do', make the most of time away from the office. When I first came to Wales I took up kayaking as an alternative to climbing because it rained so much. And yet, despite the damp weather, I'm quite content.

I'd like to think I've mellowed, acquired a stoicism that transcends immediacy and embraces what can't be changed. But that would be bollocks. There's a part of me that can still get annoyed at the weather and waiting for the gas man is as irritating as ever. No, the truth is more practical than philosophic - a few years ago I bought some time.

To be more precise I negotiated a flexible contract. My company agreed I could work an 'eighty percent' arrangement, which isn't quite the same as a four day week. About two thirds of the year I work Monday to Thursday - it's like having a bank holiday every weekend. For the remaining months, I work full time and accrue holiday that I use in blocks. Previously, I'd never have had sufficient spare to take the February half term.

What has struck me most about my new arrangement is the disproportionate difference it has made to the quality of my life. The change in ratio from five and four to four and three, may not seem huge - but it's fifty percent more freedom. And in reality it works out more than that, because so much of our supposed spare time is spent in chores and other prosaic tasks.

When I asked for the 80% contract I had grand ideas: I'd write in the library, take long weekends camping, return to painting, run every day - make up for the years sacrificed to my desk. It hasn't turned out like that. I usually spend Fridays faffing about, going for a stroll, filling the bird feeders, having lunch with Jane... I might write a blog post, or even two.

At one level this might seem an indulgence. My reduced contract didn't come for free - it cost me 20% of my benefits, and though I kept a senior job in a good firm, realistically it killed any prospect of promotion. That's a high price for a stroll and lunch with Jane.

But what I've come to learn is that by allowing myself to be less frantic (just some of the time) I'm better able to appreciate and participate in what remains. It's not only the extra time I've gained - it affects all the time I have, including when I'm at work - and especially rainy days in Pembrokeshire.

I often say to people that there's a time in your life to do something like this - and it's probably not when you're twenty five. The implication being that anything less than full time work will reduce salary and career prospects to unacceptable levels, especially for the young. In saying this, you might say I'm trapped in the old thinking - that what matters most is cash and career, security and seniority.

Perhaps, but I'm not so unrealistic that I don't recognise I only made the change based on enviably solid foundations. Not everyone can afford a 20% drop in salary - though perhaps more could if they reassessed priorities. There are others who  would not want the change - I have many colleagues, particularly senior managers, who define themselves by work. They find it hard to see how commitment means anything less than 150% - and in my experience, this remains the dominant professional culture.

As more of the population gets older the incidence of flexible working is predicted to increase. It would be pity though if that shift is restricted to mums with young children, those boosting pensions, or to low paid jobs stacking shelves.

It's a pity too that so many organisations are not far sighted enough to see that flexible working increases satisfaction and productivity. That its possible to be 100% committed (or 150% if you like management bullshit) for 80% of the time. That by working a little less, we might actually work more creatively, more intelligently, less wastefully. And that our lives might just be better as a result - which is, after all, why we work the first place.

These are hardly unique insights, but to me the practical impact has been a revelation. And today, as the rain drums the windows and Dylan interrupts me for the third time in ten minutes - why isn't the hour hand moving; do you think the mail man knows we're waiting? - I can sense it more than ever.

Two years ago I'd have been bouncing off the walls. As it is, I've got some books to review, some cooking to look forward to, and oh how lovely, Dylan's just got out the Buckaroo...

Look, here comes the postman.
Posted by The bike shed at 1:44 PM