You'll get there in the end 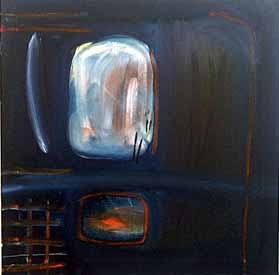 Blue Square. M Charlton
Ten days into November it is getting tougher to write a post a day. So I looked at the web site of the National Blog Posting Month, hoping for inspiration. There are over 500 interest groups, but one in particular caught my eye - Writing Prompts - described as, helpful to bloggers who are struggling for something to say. I was tempted to join.
But I didn't.
And the reason is that although I don't like being stuck, I prefer it to prattling on about 'autumn leaves' or 'five reasons to love Mondays' just because it is the theme of the day. One of the pleasure I get from writing is the way it structures my thoughts, and though it can be a challenge to make this interesting for others, it would not be eased by forcing random subjects on you.
I suppose I could knock up an emergency list of relatively straight forward posts (believe me, the collections series has long way to go yet) but that would feel like cheating. And in any case, I like to use my regular themes as sort of punctuation between more thoughtful items. No, that's not a proper solution.
Nor is asking what you'd like me to write. I've been toying with idea of doing a survey on the best of the bike shed, but not now and in this context. I might get a host of suggestions I'd feel obliged to try - in which case I might as well have joined the 'Writing Prompts' group.
Julia Cameron, in her book The Artists Way, suggests making an artist's date every week. The idea is to take yourself somewhere different and intersting. You should go alone she advises (cheap date) and spend at least an hour taking it all in. You could go to a gallery or a museum, but you might equally chose a railway station, an airport, the sea. Her suggestion is a good one, but not very practical at the moment: I need all my spare time to blog.
Julia is also a big fan of morning pages as a way of writing more freely. I agree that we need to experiment to make progress, and practicing, as I wrote in quality not quantity, can be important too. But I'd argue that practice and experimentation work best when you already have an idea spinning, or a notion at least. And these are largely private activities: writing as a 'stream of conscience' might free some people up, but it is seldom good to share.
Pondering all this reminded me of a painting class I once attended; we were asked to take a walk and draw our response to the landscape. I was struck with the same mental block, the more I looked the less I felt. As we neared the time to return I started scribbling - truly dreadful stuff, embarrassingly so. Why? Because I felt obliged. And yet when the class gathered again my tutor said, 'Has anyone been brave enough to leave a blank page?' I was so annoyed.
My philosophical side tells me I should embrace the whole idea of stuckness. After all, some people spend years meditating to achieve it, or something akin to it anyway. At work we lament the lack of thinking time, then wonder why so much of our 'doing' is ineffective. And many brilliant writers have had long fallow periods - Jean Rhys comes to mind - so I'd be in good company too.
Perhaps the trick is not to be phased by the challenge. When I took on my first mortgage I didn't worry about the years of commitment that would follow. When I cycled the Alps I let my mind wander as a way to dull the effort. They say much the same about running a marathon - take one step at a time...
I suspect that blogging is like that too - let one post lead to another - and you'll get there in the end.
Posted by The bike shed at 8:00 AM