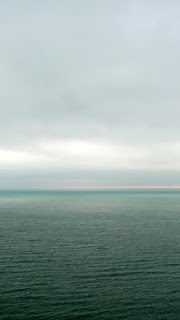 This year I've been filling in gaps. I've walked sections of the Pennine Way, climbed mountains I missed before, and visited places that had been too long on my list of 'must go there'. Other gaps too: completing my writing course, finishing the house, and connecting with old friends.
Today I went walking at Amroth; the start or end of the Pembrokeshire Coastal Path, depending on how you look at it. It is in the south of the county; not an area I visit often. My objective was Tenby, the most popular resort in Pembrokeshire and a town I'm never sure if I like or not. The walk between the two is one of the few sections of the coastal path I have not completed.
My companion was Ken, my oldest friend (well, not the actual oldest, but I've known him since school, if that makes sense). I was Ken's best man; he was mine too - twice! Until yesterday, I hadn't seen Ken for eight years. Not that we had fallen out; it was more just kids, work, geography - all the excuses that make it easier to send a Christmas card with a promise to meet up next year.
Our walk began in drizzle, a slate sea and a pale pink horizon. Amroth appeared to be closed for the winter, the rows of static caravans speckled with fallen leaves. It was much the same two miles on at Wiseman's Bridge - a pub with one customer, the cafe's billboard swinging in the wind, the one shop closed. These towns are not typical of the wild Pembrokeshire I love: they have concrete promenades, set above beaches with groynes and stone sea defences. Why would people chose to come here I wondered? But judging by the caravan parks, the do - and in their thousands.
It was good to meet up again with Ken. And walking is a fine way to do it, the contours of the path suggesting a rhythm to our conversation, talking or reflecting in response to its gradient. A lot happens in eight years, so I was pleased the going was generally easy. And as we chatted it was clear we've both faired pretty well - not without our ups and downs - but overall, not a bad outcome for two lads from the north. Our school teachers would be surprised I joked, mine especially.
As we approached Suandersfoot the wind picked up and I noticed a crab boat making for shelter in the harbour. We stopped for tea in a coffee-cum-gift-cum-cake-cum-fish-shop and watched the boats rising and falling on the swell. Sitting there reminded me of when we used to rock climb together; our motto then, 'when its fine, climb; when it rains, go the caff!' That still seemed about the right attitude to us both.
Leaving Saundersfoot the path steepened, making its way through pine and spruce woods, Tenby and Caldey Island visible in the far distance. I began to like the path more; it is not so rugged as the St David's peninsula; but it has a gentle and almost subtropical feel, less demanding than the wild north coast and perhaps appropriate for us today. Anywhere else this would be considered fabulous coastline, Ken said. I agreed; we set ourselves high standards, I thought.
Much like we do for our children. Most of our chatter was about them; their lives, their schools, what they like and hope to achieve - and what we aspire for them. Will they have our opportunities, Ken wondered? In some ways more so - in areas such as technology, travel, healthcare - but in others, I suggested, they may need to strive harder - housing, pensions, careers. We agreed on this and many other of the concerns you'd expect from two middle class, vaguely intellectual fathers tramping along the coast path in November.
Our arrival at Tenby came quicker than I expected; we passed the ugly apartments on the south promenade and made our way to the Georgian old town. After a pint in a forgettable pub we strolled around the town centre: galleries and designer stores, side by side with ice cream parlours and pound shops. This contrast is common in Wales (in Aberystwyth, for example) and generally I like it, but not in Tenby. The shops feel temporary and ill at ease in their surroundings; it is as if, for all its heritage, the town doesn't quite know who it is or what it wants to be.
I'd like to think that isn't like me or Ken. Despite an eight year gap we know each other well enough to be at ease within minutes. And for all that we've travelled different roads, neither of us has changed very much: we retain similar values, similar goals, interests and outlook. The sky was heavy as we caught a taxi back to Amroth - it was eleven miles the driver said - it didn't feel like we'd walked that far. Somehow the journey seemed much shorter.
Posted by The bike shed at 7:00 AM