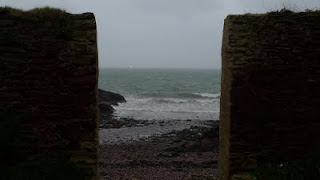 Thursday, 8.30 am, Dale, Pembrokeshire: what was it I wrote yesterday, 'when it's wet, go the caff.' Not an option today - it is coming over in sheets.

We walk across the mouth of River Gann, the mudflats teaming with gulls and waders; a golden eye and a cormorant in the pools to our left. A solitary fisherman is digging for bait in the silt, his Jack Russell scampering across the flats towards us; it stops, yaps, and an egret rises from the marsh. The Gann is one of the premier bird watching locations in Pembrokeshire, in weather like today all manner of them seek refuge in its sheltered waters.
The tide is lapping the stepping stones, a little higher than I'd hoped. No problems for now, but we will need to hurry to Sandy Haven, a tributory of the Daugleddau estuary where the river is only passable at low water. We press on, trying to ignore the sting of the rain.
The Daugleddau estuary is one of the deepest natural harbours in the world. For decades the refineries and storage plants brought prosperity to Milford Haven and Pembroke Dock. Many of the facilities have closed, but not all, and this is still an important port for oil and gas supplies.
As we walked I thought of the contrast with the River Tyne, where my father and grandfather worked at Swan Hunters. Only vaguely can I remember the shipyards at anywhere near capacity, or even the passage of boats on the river, or the dry docks where they came for repair. I do remember the building of the Esso Northumbria, the largest oil tanker in the world at the time, and the pride in the town when she was launched.
By the time we reach Sandy Haven the tide has risen. The stepping stones are under water which is getting deeper by the minute. We can either wade across or make a five mile diversion on dull roads in the pissing rain. I take off my boots and start over, my pole needed to steady me against the flow. Half way over I hesitate and assess the situation. Ken presses on and I follow; act now or be damned. We laugh at the far bank, pleased with our decisiveness - by the time our socks are back on the water has risen further and our chosen route no longer an option.
Reaching the oil terminals I am surprised at the lack of ships and empty docking platforms. Perhaps the weather was a factor, for it was near here that the Sea Empress ran aground in 1994, spewing oil across most of Pembrokeshire Coast. Often the tankers wait in St Brides Bay for the storms to subside before entering the harbour.
I am conscious that in most landscapes I dislike the intrusion of technology, and I have ranted often about the windfarms that so despoil the Cambrian Mountains. But this place has long given itself over to industry and the lower estuary has been used by shipping for five thousand years. It is still its defining feature: there are marinas at every inlet; the ferry leaves for Ireland twice a day; pilots chug between the many active harbours. These are all well and good, but it is the big ships that make the real difference, and today the seaway looked lonely without them.
Rounding the headland at Milford I noticed a strange ship docked on a pontoon. It was neither a tanker nor a container ship, more a combination of the two. Four silver pipes connected it to the land, where a spaghetti of tubes entered futuristic buildings in front of grey storage domes. This is the new liquid gas plant, a project that has regenerated the disused refinery. In the driving rain it looked more hopeful than I'd expected. 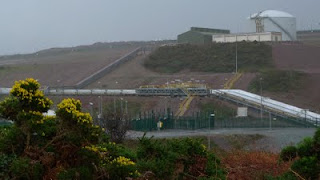 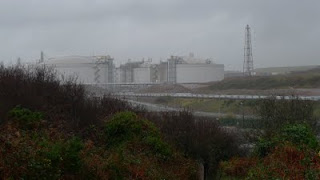 We reached Milford quay, the rain streaming down the hill which bounds the harbour. Milford feels like a town teetering on the edge; down but not quite out. Sixteen years ago the Tall Ships Race came here; there were plans for a major regeneration, the quayside was tarted up and units built for cafes and chandleries. There has been some improvement but it hasn't quite worked. I'd bet a lot of money that only a handful of the yachts are owned by locals.
We took shelter in Tesco, a pool of water gathering around our feet. The tills were busy and it was far cry from the desperate stores I've seen in Newport or the South Wales Valleys. I hope it stays that way. I hope the new investment works better than the fancy plan for tourism that was always a long shot. But I am not optimistic.
For amongst the christmas tinsel, there are tell-tale signs of decay: the locked spirits cabinet, the drug abuse posters, the small display of fresh vegetables - and the lengthening queue for the lottery.
Posted by The bike shed at 4:10 PM