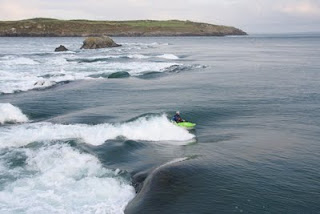 The Bitches - all photos copyright Deborah Cook
On the far tip of Wales, a kilometre or so to the south west of St David's Head, lies Ramsey. The stretch of water between it and the mainland offers the hint of safe passage from St Brides Bay to the North Pembrokeshire coast. In reality, Ramsey Sound is the site of countless shipwrecks, and still today it catches many sailors unawares.

Twice a day the great mass of water stretching from the Severn Estuary, round the Gower and past Milford Haven makes an inexorable journey into the Irish Sea. Pulled by the alignment of the sun and moon a small ocean of water is forced through the Sound, creating the largest tide race in Europe. Porpoises have learned to gather at the end of the channel, waiting for the fish that are drawn there; this weekend saw a rather different gathering of the clans. 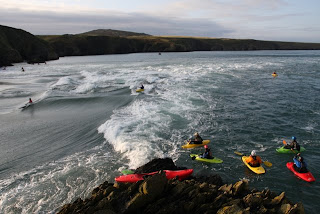 At 4.30 am on Saturday morning I could hear rustling downstairs. My friend Debs had come to stay, inviting along a group of fellow kayakers; they were preparing for an early morning paddle. These are not your run of the mill kayakers; Debs, a professional for twelve years, is one of the foremost white-water paddlers in the world. Her friends are equally competent, and just as well, for the September equinox creates the biggest tides of the year.

The tide race is known as the Bitches, though the name really belongs to the rocks that funnel the water into narrower channels. As the sea is pulled through the Sound, it is forced over a shelf and further squeezed between jagged pinnacles, creating the waves, holes and towbacks which are the reason the kayakers come. At full flow, over 300,000 cubic meters of water will pass every second - a drifting boat would be a carried at twenty miles an hour over waves and rapids as big as than those in the Grand Canyon. 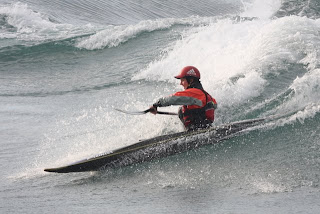 The Bitches has become a popular destination for tourists, who venture out on thirty foot ribs, powered by water-jet engines. It's a thrill seeker's paradise, but it is usually done in the daytime when the tides are much smaller and there is safety cover to hand. Paddling out before dawn in a ten foot plastic boat, is a different prospect. It is an entirely different experience too.

Certainly, the kayakers have come to test themselves against the power of the water, to feel their adrenaline rise with the tide - but that is only part of the story. For in the early morning, as the light slowly fills the sky and the roar of the water subsides into white noise, this is a silent, spiritual place. I was once there when the sea was so calm it held the reflections like a painting, the horizon of the over-fall melting into an infinite sky. A bull seal watched me from the eddy, boils of water turning me in endless circles round his huge dog-like head. All around me was elemental chaos, and yet I barely noticed.

In my late twenties and early thirties I paddled the Bitches hundreds of times. It was the reason I first came to Pembrokeshire; I learned to roll a kayak there; it was where I saw my first sunfish; I made life-long friends of my kayaking partners; eventually I bought a house nearby. I once went there with local expert Andrew Middleton - we were alone that day, but nothing could go wrong, could it? Except I capsized and on rolling up I somehow managed to slice open my nose with my paddle, nearly fainting from the rush of blood; Andrew nursed me back, all the while reassuring me it was only a scratch. We laughed afterwards. Good times. 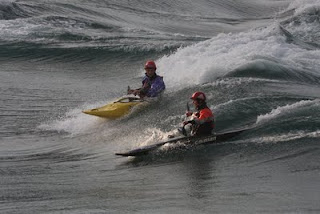 Debs and her friends return mid morning. Their sleeping bags and mats are still strewn over the floor; after a tidy up, they join me for a late breakfast in the garden. Geraint and another Deborah had travelled most of the previous night to be here; they'd had three hours sleep before I heard them leaving before dawn. Andy and Cat were glowing as they recalled the early morning light and the power of the waves. Their chatter reminded me of when I was younger, though they are all of them much better paddlers than ever I was.

Andy asks me if I still go out in my boat. Not often I tell him, explaining that the pull of children and family is pretty hard to square with the demands of serious kayaking. He is a marine architect working in Southampton, which he describes as 'not the best place for white-water', adding that his life is 'all week in the office and weekends on the motorway.' He talks eloquently of the tension between pursuing his career and a yearning for greater freedom, the time to pursue his dreams. It is a tension I knew well at his age.

Geraint asks if I want to paddle that evening; I'd be fine he tells me, the skills would soon come back. Debs kindly offers to watch by me. 'We can go out at flat water,' she says 'before the tide turns.' I am tempted to accept, to sod it all and take a chance. But then I weigh up the odds, and think of the consequences, and remember too that it is the equinox...

I am touched by their generosity but politely decline. 'Are you sure?' Geraint asks, one last time. I nod, and am happy with my choice, knowing that for me the tide turned a good few years ago.