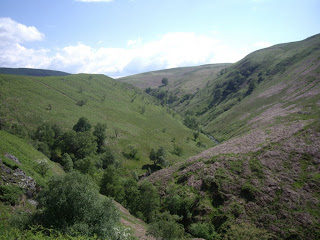 Sometimes it's the snatched opportunities that we remember most. Trips we plan too carefully often fail to meet our expectations, leaving us deflated and wondering why we made the effort. When I think back it is often the chance encounters that are most vivid in my memory.

And so it was last weekend. I'd planned to go backpacking with Daniel, mapping out a route over the Beacons, researching a wild campsite – I'd even packed his rucksack. 'I don't fancy that route,' he said, just before we were due to leave. 'It's too far and too high, can't we go somewhere different?' We'd already had a row – typical teenage lounging as everyone else was getting about the morning – it was midday by now and I was keen to be off. 'We could go to the Doethie valley, but it's a bit of a drive to get there.' Excellent he said, I can sleep in the car.

The Afon Doethie rises in the southern hills of the Elenydd, falling steeply into the wider curves of the upper the Towy near Llandovery. The Towy is a favourite with picnickers, who splash in the gravel beds, much to the annoyance of fishermen casting their lines into silent pools. A few miles upstream the Doethie valley marks the end of the road; the only way onward by foot or horseback. At its head, only five miles distant, the valley joins the high plateau of hills above Soar y Mynydd and the Llyn Brianne dam. Anyone wanting a pick up would need to persuade a driver to make a thirty mile diversion to meet them over the watershed.

We started our walk here, it was late afternoon and we were hoping to make camp by a copse of oak trees that I knew to have flat ground. When we arrived, there were jays in the trees, being harried by what looked like large hawks, though I wasn't certain. It was early and we decided to carry on, reaching the track to Soar y Mynydd as the sun began to dip into the horizon. From here we walked to the old youth hostel at Ty'n Cornel, once an isolated farm accessible only by the drove road from Llanddewi Brefi. I love this place, rescued from closure by the Elenyndd Trust, it is the best and most remote hostel in Wales. The volunteer wardens, Mark and Bronwen, greeted us with traditional northern hospitality, 'Would you like cup o tea?' We would, and we decided to camp in the hostel garden. 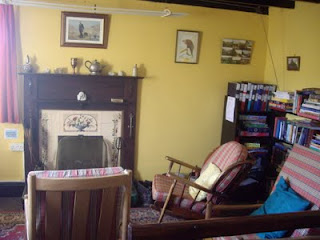 The hostel has a small snug; there is one conversation and you either join in or bugger off. We started the evening as strangers, sitting round the fire, and as so often happens you realise it's a small world. Bronwen was studying creative writing and Mark told me story of how he and a friend had once walked four miles to a pub in Pembrokeshire only to find it had shut up shop the week before. That pub is next door to my house, and I vaguely remember two blokes sitting on the wall one evening and their disappointment as I told them they'd be waiting a long time if they wanted a pint.

As we retired to the tent the sky was alight with stars; I could see the Andromeda galaxy, the Milky Way a thick band from horizon to horizon, the occasional meteor falling through Leo. The tent was thick with dew, and we snuggled into our bags leaving the door open to the night. 'I like it here,' Daniel said, and fell asleep.

Next morning we packed and ate breakfast with our new friends; a woodpecker joined us on terrace, picking at the nuts in a feeder. Some of the hostelers were off home, one chap was walking to Dolgoch, the other hostel run by the trust – it is lit by gas lamps and has a church organ in the sitting room. We would retrace our steps, descending with the river to the car near Rhandirmwyn. Not a cloud above us, the bracken damp and smelling of earth; two ravens sat on the oak trees where the jays had been. It was swift walk; Daniel strode ahead of me, leaping over the pools and squelchy ground; his back now as broad as mine, his body chiseled and hard. The river, young too at this height, cascades its way over rocks and drops, foaming and turning, gouging in haste to reach the flatter landscape.

I walked the last miles some way behind Daniel, enjoying the silence, the company of the river. As I stopped to drink the peaty water a dragonfly rested on my arm, its huge eyes watching me, daring me to move. It followed me for a while, attracted I think by the colour of my rucksack, until I reached the road at Troedyrhiw farm.

Daniel was waiting at the car, lying on the grass and looking at the sky. We had parked near the cave of Twm Shon Catti, the welsh Robin Hood. The legend says he lived in these hills before building a manor at Tregarron and becoming a pillar of society. I wonder if he ever returned – snatching a visit on days when the sun shone, the river tumbled through the autumn bracken and dragonflies hovered by the streams. There are few better places in Wales.