The artist at work 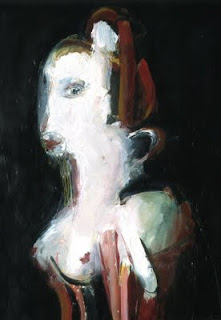 Ideal portrait - J Skinner
I have written before about my painting tutor John Skinner; he was one of the greatest influences on my life. Uncompromising, challenging to the point of being confrontational, he would scorn anything he saw as false or trivial. His biggest ire was reserved for those who sought recognition at the cost of integrity.
I was thinking about John and what he'd make of my writing, whether I'm as true to my ambitions as he encouraged me to be when painting. You have to accept failure he'd say, to be prepared to risk everything for the chance of success. If you know what you are going to paint, then it is merely craft; you must respond to the marks, developing from a notion, building it up layer on layer - but always holding onto the feeling; the underlying desire to communicate something that is beyond yourself.
John was talking about painting, but the process of writing is much the same. Most of what I write develops as I type - I had only a vague idea what I'd say as I started this post. I like this process, love it even; it keeps me sane in the madhouse of life. In some ways I envy those who don't feel that need, but I wouldn't change places, for it is worth the struggle.
I have a short film of John working and often play it to remind me of what I've written above. I found a version of it on youtube and I thought I would share the link. Notice how the painting changes as he works on it. Notice too the the scale of his ambition. Whether you like the painting or not is beside the point; it is the process that is important. Watching it today brought to mind how we often end up in a different place to where we had planned to be - and a good thing too, for life without surprises would be boring indeed.
Here is the link
http://www.youtube.com/watch?v=x5IweYkXlMU
The music is composed by his son.
Posted by The bike shed at 8:27 PM