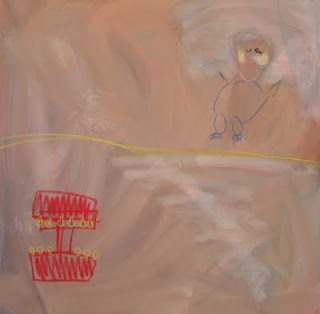 Mikey on the chair-plane. M Charlton 2005

Driving to Wales this morning, Dylan asks me, 'What happens if you work too much Dad?'
'You'd have lots of money, but not enough time to spend it.'
'That's tricky,' he replies. 'I think it's best if you just work enough to be happy.'

Having recently despatched the concept of fairness in a single sentence (see here for how), Dylan was applying his uncluttered four-year-old mind to the modern dilemma of the work:life balance.

Cash rich: time poor – or often the opposite – is the lament of many middle class households. But the concept of the work:life balance, so beloved of lifestyle gurus, misses the more interesting question of how best to spend the life part. What is it that constitutes the good life in a modern context, and how are we to attain it? It's another of those ponderings that takes up too much of my time.

Plato would have approved; he believed the good life was a one of contemplation, philosophy being the highest form of living. You might argue he would say that wouldn't he, but this school of thought is a common thread amongst the ancient thinkers. They were perhaps the first Westerners to record that the quality of life was about more than material gratification.

In the Judeo-Christian tradition which followed, closeness to God replaced the idea of the philosopher king, the good life defined by strict moral behaviour leading to spiritual redemption. Frederick Nietzsche dismissed this as the morality of slaves, urging us to find meaning in our lives by pursuing our dreams; God is dead, he said, we must find our own salvation.

Nietzsche is a notoriously obscure philosopher with unfortunate fascist connotations, but his prescription that we strive to be an a-moral Ubermensch is closer to most people's concept of good living than is following the Ten Commandments. I have a lot of empathy with the idea that we should chase our dreams and that a successful and happy life consists of catching at least some of them.

In a more modern and liberal context, AC Grayling (who would be horrified to be compared to Nietzsche) has written eloquently of how, in the absence of God, we should strive foremost for a life that is richly filled, rather than simply long-lived. Of course, we would like to have both – but so often we settle for sort of sub-life that wastes time and opportunity. At the recent DO Lectures in Cardiganshire a range of inspirational speakers gave tips for more productive living; ditch the TV, was top of the list.

But chasing our dreams is only part of the solution. God may well be dead, but we still have a need for something deeper than the here and now. Bertrand Russell, in his book The Conquest of Happiness said that we need to feel part of the past, and connected to the future.

This seems to me to be right; intuitively we want our children to have a safe and secure childhood, to be loved and feel wanted – we know too, that those who suffer trauma are often disconnected in adult life. Similar claims can be made about nationality, and religion – to deny people their sense of continuity creates a void that no amount of possessions can fill. And as to a connection with the future, children are again our most obvious salvation, but there are other ways to feel we have contributed beyond ourselves – through work, or art, or the example we show to others.

Russell also hit on a very practical idea that I have held to be true ever since I read it as student. He said we need to have at least one interest that we pursue entirely for its own sake – not because it advances us at work, for social climbing or because of pressure to conform, but because we love it in itself.

As I write these words I am reminded of the Olympic cyclist Rebecca Romero, who switched from rowing to track cycling in pursuit of a gold medal. Her victory in Beijing struck me as hollow, as if all that mattered to her was winning; there was no apparent love of the activity itself. I think also of her haunted face on the podium in 2004 and compare it to the joy of my kayaking friends last weekend, as they returned from paddling at sea – these are world class performers too, but their motivation is different, and I know which I think is the closer to a good life.

Returning to the 'work' side of the equation, many of these ideas apply equally to our jobs. We want our work to be satisfying; it is good to care about what we do and how we do it. Similarly, a sense of heritage can be an important aspect of our personal and community identity (think of the shipyards and coal fields, the recent demise of Woolworth's) and a secure future is fundamental to what the management types call 'employee engagement'.

Most of us rightly consider our work as primarily a means to an end, particularly in the context of the modern limited company, where individual contributions are seldom meaningful in isolation of others. But occasionally we see the work:life values wildly inverted and the result is sort of tragedy.

A previous boss of mine was apt to wax lyrical about the importance of family – in practice he came to the office at 6.00am to avoid the traffic and left at 8.00pm, supposedly to do the same. In reality, he defined himself by work; hitting the numbers was as much a personal challenge as business imperative; by his own admission he saw little of his children growing up and tried to make amends with his grandchildren. Even more tragic, the editor of a newspaper I worked for, so defined himself by his role, that he committed suicide when he was asked to step aside. We were given the news when he failed to show for his leaving party.

Recently, the psychologist Martin Seligman has written about what he calls authentic happiness. His hypothesis is that we each display a tendency to certain 'virtues'. By virtues he means those character traits that are universally regarded as good by societies everywhere and throughout time – examples include courage, a love of learning, care of others, leadership, creativity, sympathy – in all he identifies over twenty. Seligman claims that the truly happy life is the one in which we have the opportunity to pursue those virtues that are closest to our nature. So in my case, I need to finding time to think, and create and be inspired and develop a deep knowledge of certain subjects – ideally I need do these things with my family and at work too. I know that when I mange it, I feel most happy and motivated; most alive. For others, the recipe will different, but the concept is the same.

Seligman's ideas take us full circle – for it was Aristotle, the student of Plato, who said that a life of virtue was the definition of a good life. Much though I hated studying Aristotle, I think I now agree.

But, I'm not so sure about Dylan. 'What makes you most happy?' I asked him as we crossed the river at Carmarthen this morning. 'That's easy,' he said. 'It's trains every time.'