In innocence, in vain. 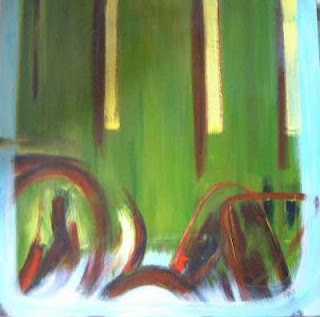 ‘Let’s start with some poetry’, he said.

He stood in the centre of the group, dressed all in black, and read from a battered blue notebook. His voice was louder than I’d expected, a little flat in tone. We listened intently, trying to fathom the meaning of the words.

‘How did you begin?’
‘Someone came into the studio and started talking about swimming away from the shore. He said he was most afraid the shallows, because there wasn’t enough water to hold him up.’
‘I don’t understand.’
‘It doesn’t matter; it just made me see it differently. It’s not logical. I realised it was the weight of the sea that I felt -its depth and it’s power - and that’s what I needed to paint.’

‘Maybe, but all this painting your sensations stuff - it’s your way John, not mine. I feel like I want to paint straight lines – stripes even. That’s what I really want to do.’
‘Okay, so paint stripes then.’
‘But I can’t just do that.’
‘Yes you can. You can do whatever you like.’
When we returned to the studio he took a five-foot square canvas from the rack and handed me a brush loaded with paint.
‘Now paint your stripes,’ he said, before leaving me on my own.
As I drove the brush across the canvas I felt a sense of relief, of joy even. More than that: I felt, perhaps for the first time, that I was connecting to something beyond reason. Even now I don’t quite have the words to describe it. It had taken me a year of struggling to reach this point – the result was three vertical stripes, applied in less than thirty seconds. I remember standing back and admiring them, grinning even. It felt like my best ever painting.
A selection of John's paintings can be found at this link
Posted by The bike shed at 1:22 PM