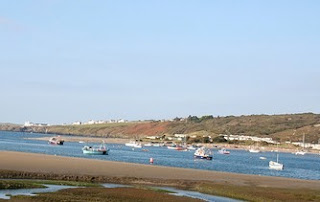 The Teifi estuary is an inauspicious start to the Pembrokeshire Coast Path. Poppit Sands is little more than a scruffy jumble of car parks, a concrete lifeboat station and a wooden cafe that seems never to be open. The ‘sands’ themselves are grey, darkened by shale and tidal mud, chief collection point for the flotsam of Cardigan Bay.

And beyond, up the steep lane that leads to the Youth Hostel (like a three-bed-semi with picture windows) it is little better. The farmyards here are littered with tyres and plastic bags, the hill cottages largely colonised by putative eco settlers, their ubiquitous wind-catchers flapping on every gatepost. Looking to the north, the view of Cardigan Island is sullied by the hotels and caravan sites that pepper the shoreline.

I have never liked it much here. There is not enough space for the river to end and the sea to begin; it is more of a harbour's mouth than an estuary proper. The Teifi has carved a deep channel between silted banks, allowing boats to sail up river at virtually all tides. This explains why Cardigan, despite giving its name to the great sweep of Mid-Wales coastline, is actually four miles inland.

In fact the river is more impressive by the town, above which it flattens into an expanse of wetland, home to otters, warblers, herons and just recently, a bittern. Upstream is the beautiful Cilgerran gorge, then Cenarth with its water mill (I once saw a seal here); further up again, the fairy glen of Henllan falls, then the seemingly innocuous weir that has taken the lives of far too many canoeists. Some years ago I helped raise the money to build the canoe centre at Llandysul; soon afterwards, the 'safe' slalom course I had paddeld dozens of times would take another life.

As we walked down the Teifi estuary this week I urged Daniel on. I wanted to put it behind us, to reach Cemaes Head and watch the Kestrels on Pen yr Afr before the light began to fade. We had half planned to camp out, but it is difficult here. The cliffs are high and sloping, the path traverses at half height and there are few places to sit never mind pitch a tent. It began to rain.

We pressed on towards Ceibwr, climbing the highest section of the entire Coast Path and passing the ravens nests at Foel Hendre as the wind licked up a downpour. When we reached the car at Trewyddel it was almost dark. We headed for home, the last of the sunlight hidden by the thickening clouds.