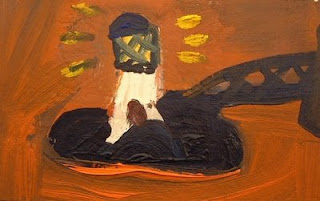 A lighthouse... no fancy nonsense, just a plain old lighthouse.
What is they say about never discussing religion or politics?   Oh, well...
There are few things that get me going more than the over-intellectualising of religious beliefs by philosophers and religious commentators.  It's not so much that I am a non believer; it is the huge disparity between the ideas they spend their time discussing and the practical realities of most people's faith.
Intelligent design theory (the idea that life is so complex that it must have required an intelligent creator rather than happen by chance) is a case in point. Does anyone seriously think that this is what the vast majority of religious believers think and care about?  Suppose it were provable-what then? It goes nowhere towards showing the validity or otherwise of any particular creed.  Some of the ID variants that seek to use quantum theory to 'prove' God's existence are even worse.
This week in the Guardian, Madeleine Bunting cooks up another recipe in defence of lost causes -this time it is 'belief through practice' and the 'borders of belief and non-belief' that are put forward as the antidote to good old fashioned reasoned argument.
Mark Vernon in his usually excellent blog, gives the article an enthusiastic mention. As an ex-priest and a full-time philosopher he no doubt has more sympathy than me.  The computer gremlins wouldn't allow me to post a comment on the Guardian website, so I left it on his blog instead.  For those of you who might be  interested, it is copied below.
But before you read on, let me make one point in case it is not entirely obvious.  My ire is not directed at the followers of any religion; that is their business and whatever I say shouldn't carry much weight anyway.  What I so dislike, and the real target of my comments, is the weasel words and twists and turns and grasping at straws and up-in-the-clouds, superiority-complex driven intellectual tosh that these quasi philosophers pedal...
There, I feel better now!

There is little that gives philosophy and philosophers more of a bad name than the over-intellectualising of the religious apologists. If Madeleine Bunting seriously believes that the millions of practising Christians, Muslims, Jews, etc. base their belief on 'faith through practice' then she really is too far removed from reality.

Why is it that the philosophers and commentators who defend religion use straight forward 'plain speaking' reason in virtually every other part of their life, except when it comes to the argument they are losing? This 'faith through practice' hypothesis, much like the intelligent design theories, is little more than intellectual succour for an argument they have lost. I don't believe for a moment that if they could use common sense, rational, evidential arguments in support of their beliefs that they wouldn't advance them before this sort of weasel worded nonsense.

Of course, almost all believers would accept that God as an 'old man with a white beard' is bit of a ridiculous notion, but surely that doesn't mean the vast majority of religious adherents don't still worship God as (broadly) an all powerful, all seeing, caring, vengeful being. The faith of these people has next to nothing to do with 'belief through practice', still less to do with intelligent design, or the borders between belief and non-belief. They don't use these notions, neither do their priests, nor is it the basis of any part of their faith.

I'm sure that someone will say I'm missing their point. But my counter would be that it is the likes of Bunting and Swinburne who are missing the real point. If Madeleine Bunting wants to spend her time thinking about such intellectual intricacies I guess that's her choice, but frankly, who cares - the general church going public certainly don't. To use my most basic of tests; if anyone thinks my Mum (and millions like her round the world) is motivated to go to church each Sunday because of this sort of shifty intellectualising, then they have seriously lost the plot.