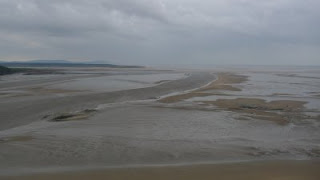 There was time when I thought Carmarthen was the worst bottleneck in Wales. The hours I've spent behind tractors, devising rat-runs to avoid the queues on bank holidays. It's a pointless exercise; to get east or west you have to cross the Tywi and there's only one decent bridge. Once I headed into the lanes, regaining the main road three miles later, crossed the bridge - hooray - only to find the entire A40 had been closed! That was the first time I went to Llansteffan, to wait for things to clear.
This week we returned. It was raining and the car park at Tesco was so full you had the indignity of queueing to get out. 'Everyone's stocking up for the weekend, 'said Jane, 'Perhaps town will be better?' Forty minutes later we were still waiting in a line. 'There's no point getting angry, Mark...' I turned the car around.
Llansteffan is as good a place to wind down as any I know. It feels like a smaller, more lived in, version of Laugharne. But whereas Laugharne is a disappointing place - were not for the association with Dylan Thomas it would not merit its visitors - Llansteffan is surprising and about as unspoiled as they come. It also has a better castle, a proper beach, and an eccentric grocers-cum-bistro-cum-lodging house that would not be out of place in Under Milk Wood.
This is not to say that Llansteffan is pretty - its foremost charm is a sort of relaxed shabbiness, that comes from ageing gracefully rather than primping up to fit the tourist pastiche. Its other charm is that it sits at the head of the Tywi.
The Tywi (or Towy) is the longest river to run its course entirely in Wales. It is an unhurried journey; begining in the Cambrian mountains, meandering its way through quiet valley to Llandovery and Llandeilo, past castles and stately farms, before eventually reaching the sea below Carmarthen.
I say 'reaches the sea' as if this were a definite point, but in practice it isn't like that. At low tide the estuary stretches to the horizon, the water and land gradually dissolving into each other. On Thursday we watched from the ramparts of the castle as the tide begin to flow - the pinkish sands turning to indigo, the indigo water turning to pink - the distant hills of the Gower the only discernable feature.
Llansteffan castle stands above the village, at the end of a single track road on the last spit of land; there are no signs and no parking is allowed. The rain eased as we explored its keep and gatehouse, standing on the ramparts as the water slowly covered the beach below. The tide began to race, widening the channel that separated us from Ferryside on the opposite bank.
Dylan huddled close. I picked him up and he pushed his tiny fingers into my mouth for warmth and comfort. We watched a fishing boat which had slipped its mooring, drifting in the eddies - eventually it swung into the current and was carried upstream. The sky was brightening but the wind was still bitter; could we go home now, he asked.
Posted by The bike shed at 8:13 PM