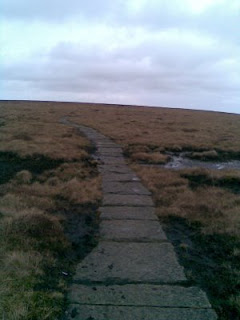 Thirty years ago I walked the Pennine Way. In truth I only walked some of it; I cheated on the harder bits and skipped most of the dull parts completely. It didn't matter at the time but it rankles now, so I've decided to walk it again, this time in sections. I don't care about the order I do it in; I just want to complete the route - to fill in the gaps.

Perhaps also, I want to show my boys that I'm still capable– that there's more to Dad than the figure of fun you gradually become as they get taller and you get fatter. Look – Dad's trying to climb the cliff! I know that I want them to remember me as a strong man. That's a male thing perhaps, a middle aged one too I suspect – but a powerful feeling just the same.

It's curious how one day you swell with pride as they unexpectedly keep pace while you're running or walking or cycling – whatever – then before you know it, they've overtaken without so much as a backward glance and you're relegated to holding their bags and cheering from the sidelines. Go for it boys - don't look back!

The other week I was saying to Jane that I've been lucky enough – and I guess strong enough – to do some marvellous things: climbed mountains that most would never set foot on; kayaked rivers that even fewer would have the courage or skill to master. In fact when I think about it, I've ran and cycled and swam and walked and painted and written and camped and travelled… So isn't it my boys' turn now? Shouldn't I be content to wallow in the vicarious pleasure of parenthood?

I was pondering this as we started over Kinder; as Daniel skipped up Jacobs Ladder, my entreaties lost in the wind as I watched him bouldering on the rocks that litter the summit. When I caught up I was sweating from the effort. He was about to lope off across the newly laid slabs that cut a path across the moor.  I tried to tell him how it wasn't this simple when I was last here. 'You used to sink to your knees in the peat.' Yeah, yeah… Watch out, you keep tripping up on the gaps.

At the Downfall on Kinder Edge, Daniel wants a drink. I take the water bottle from our rucksack and he drops it in the stream. Jumping to retrieve it, he soaks his boots and loses his glove in the collection pool. He looks forlorn and asks me to fish it out. Later, as we walk over the miles of slabs on Featherbed Moss, I notice that he keeps falling behind – more through boredom than fatigue. And yet I press ahead. I want to reach the road, to cover the ground; as if to set something right.